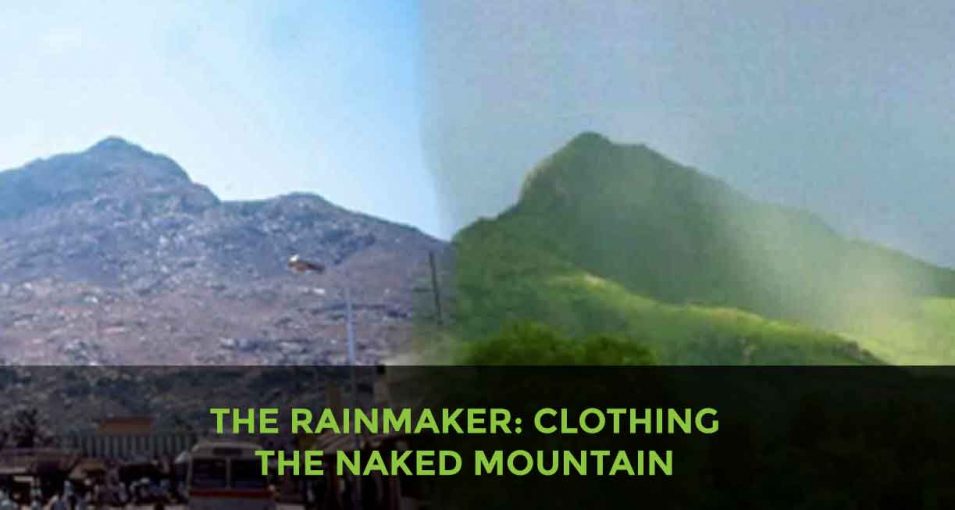 Before the forest grew, in the early few years of my time by the sacred mountain Arunachala in south India, some mornings I would look up at the peak shrouded in cloud, and optimistically hope that rain might fall.

Invariably though, I was disappointed.

The reasons are obvious, now that I’ve watched the mountain for so long.

Invariably, the prospect of rain would evaporate – literally – as soon as the sun rose and beat down on the dry rocky slopes.

The temperature for seven months of the year averages a daily maximum of over 35 degrees, and often much more.

Hot – parched and dry at first, in March, building up to stifling and humid pre-monsoon, then simply sauna-like until the relative respite once the monsoon has passed by December.

Comparatively mild for the next three months until the build-up process begins again.

As soon as that sun heated the dry stony surfaces the hot, dry air rising up as ‘transpiration’ but without the moisture that the word suggests.

As soon as that air merged with the clouds – pfff – the cloud would thin and vanish.

No rain until the pre-monsoon showers may offer respite from the dry heat.

Well it should be obvious, shouldn’t it.

If there were trees all over the mountain, then of course the same sun hitting the same mountain, would have a completely different impact.

Instead of sweating and suffering, it’s a very pleasant walk, shaded and relatively cool, since any air moves across vast areas of leaf surfaces.

Leaves are transpiring constantly, releasing moisture as they ‘breathe’, and just a water moving across a pond cools the air, the same thing happens with the trees.

But the effect is so much greater than that.

These days, if there are clouds enveloping the peak, when the sun strikes the mountain, the trees transpire, the water evaporates, meets with the clouds, condenses until they can no longer hold all that extra moisture, and it falls as rain.

So the trees have, in effect, ‘made’ the rain, and springs run where they have not run since many years.

This is a transformation of the local climate of the mountain, and countless individual microclimates have been created or radically enhanced, just by planting the trees.

And where any microclimate exists, plants and animals, birds and insects, reptiles and the countless soil life begins to occupy that site, all perfectly ‘selected’ by nature.

It’s a huge accelerator factor: one new plant species arrives, and there are specific creatures associated and attracted by that species will arrive.

Each of those in turn has other associates, and the explosion begins.

I am told that the bird census at Arunachala counted something like 220 different species last year, an increase of many times over since the last count around 40 years ago, when the mountain was so barren.

Without doubt all those birds have relationship with so many other creatures and organisms, not to mention their unintentional import of yet more species from other zones away from the mountain.

Big cats, and even an otter appeared during the last monsoon season (2019).

Such a spectacular increase in species also represents a geometrical increase in the transformers of organic material, and hence of soil fertility.

So the ability of the mountain to germinate more plants, and increase the soil volume is also vastly augmented.

It all seems quite ‘miraculous’, but of course there is a divine order in the apparent chaos, and my incredulity is only a reflection of my own inability to fully comprehend the capacity and speed of Nature to heal herself.

And also to accept the potential of our own human role to be agents of that acceleration.

How did the reforestation come about? How long was the mountain barren? It seems like a big part of this story has been left out. Was there an ecological restoration project that happened or just leaving nature take it’s course.. and what were the factors for it not happening sooner?

Thank you for your interest in the reforestation efforts on the sacred mountain. I apologize if the blog post did not provide enough information about how the reforestation came about and the factors that led to the mountain being barren for some time.

The reforestation on the sacred mountain might have come about through a combination of different initiatives such as local communities’ effort, government’s ecological restoration project and NGOs. It’s not specified in the blog post, but it’s possible that the mountain was barren due to a variety of reasons such as overgrazing, clearcutting, natural disasters, and fires.

It’s not mentioned in the blog post how long the mountain was barren, but it could have been for many years. The reforestation might have taken time due to lack of funding, lack of awareness, or other challenges.

The reforestation might have been done by natural regeneration or by planting the saplings of native species. The blog post focuses on the benefits of the reforestation on the mountain but it doesn’t go in details about the process itself.

I apologize for any confusion that this might have caused. If you would like more information on the reforestation of the sacred mountain, I recommend consulting with local organizations or government agencies involved in the project. They can provide more detailed information about the history, the process and the outcome of the reforestation effort.