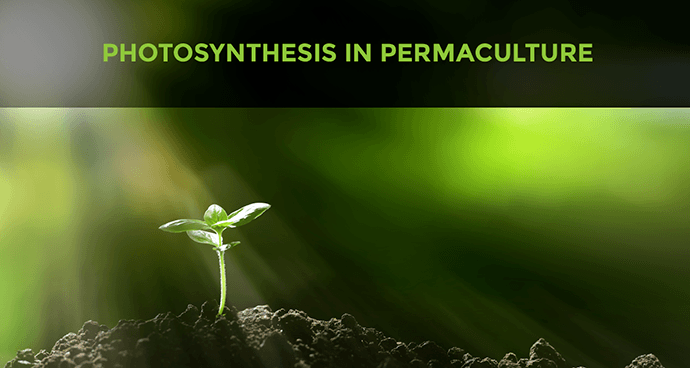 Description: photosynthesis is crucial to the future of human society as through this process plants provide food, oxygen, medicine, and products for people, as well as creating and preserving the soil.

If we want to apply permaculture, we must understand photosynthesis

Plants are vital organisms that underpin almost all animal life on Earth by generating a large proportion of the oxygen and food that provide humans and other organisms with aerobic respiration with the chemical energy they need to exist.

The process used by plants (also by algae and certain bacteria) to harness energy from sunlight into chemical energy is the photosynthesis, a process we have to understand clearly.

There are two types of photosynthetic processes:

Oxygenic photosynthesis is the most common and is seen in plants (also in algae and cyanobacteria).

During oxygenic photosynthesis, light energy transfers electrons from water (H2O) to carbon dioxide (CO2), which produces carbohydrates. In this transfer, the CO2 is “reduced,” or receives electrons, and the water becomes “oxidized,” or loses electrons. Ultimately, oxygen is produced along with carbohydrates.

Oxygenic photosynthesis functions as a counterbalance to respiration; it takes in the carbon dioxide produced by all breathing organisms and reintroduces oxygen into the atmosphere.

In his 1998 article, “An Introduction to Photosynthesis and Its Applications,” Wim Vermaas, a professor at Arizona State University surmised, “without [oxygenic] photosynthesis, the oxygen in the atmosphere would be depleted within several thousand years.”

On the other hand, anoxygenic photosynthesis uses electron donors other than water. The process typically occurs in bacteria such as purple bacteria and green sulfur bacteria. “Anoxygenic photosynthesis does not produce oxygen — hence the name,” said David Baum, professor of botany at the University of Wisconsin-Madison. “What is produced depends on the electron donor. For example, many bacteria use the bad-eggs-smelling gas hydrogen sulfide, producing solid sulfur as a byproduct.”

The overall process can be neatly summarized as a chemical equation.

Here, six molecules of carbon dioxide (CO2) combine with 12 molecules of water (H2O) using light energy. The end result is the formation of a single carbohydrate molecule (C6H12O6, or glucose) along with six molecules each of breathable oxygen and water.

As explained by Govindjee and John Whitmarsh in “Concepts in Photobiology: Photosynthesis and Photomorphogenesis” (Narosa Publishers and Kluwer Academic, 1999) the letter ‘A’ in the equation is a variable and ‘H2A’ represents the potential electron donor. For example, ‘A’ may represent sulfur in the electron donor hydrogen sulfide (H2S).

Photosynthesis generates all the breathable oxygen in the atmosphere and renders plants rich in nutrients. 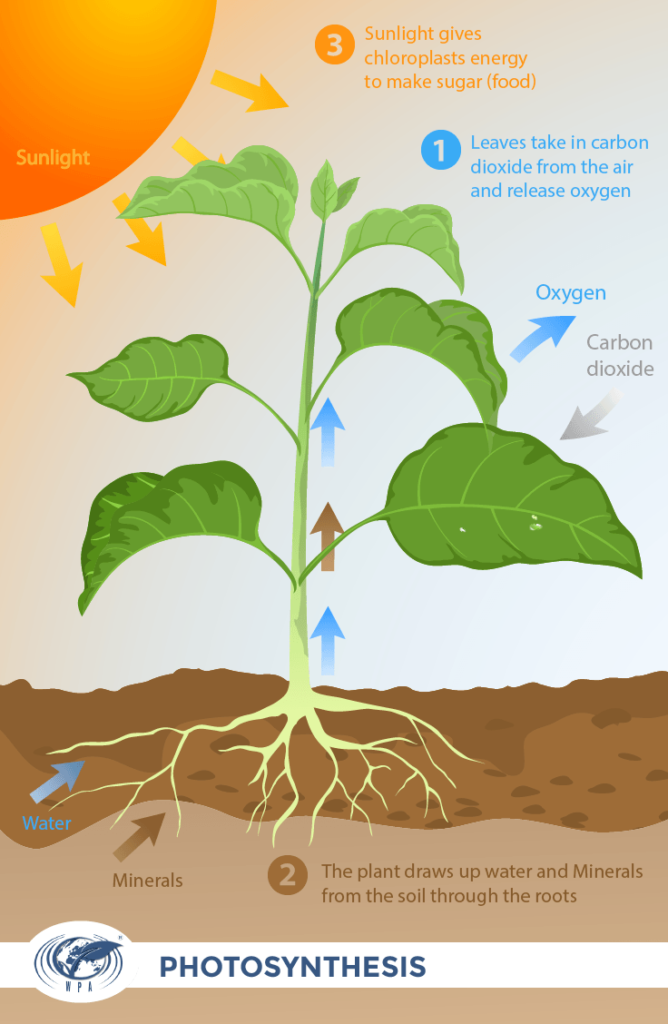 When a photon of light hits the reaction center (the pigments and proteins which convert light energy to chemical energy and begin the process of electron transfer, according to Vermaas), a pigment molecule such as chlorophyll releases an electron. “The trick to do useful work is to prevent that electron from finding its way back to its original home,” Baum told LiveScience. “This is not easily avoided because the chlorophyll now has an “electron hole” that tends to pull on nearby electrons.” The released electron manages to escape by travelling through an electron transport chain, which generates the energy needed to produce ATP (adenosine triphosphate, a source of chemical energy for cells) and NADPH. The “electron hole” in the original chlorophyll pigment is filled by taking an electron from the water. As a result, oxygen is released into the atmosphere.

ATP and NADPH are rich energy sources, which drive dark reactions. During this process carbon dioxide and water combine to form carbohydrates like glucose. This is known as carbon fixation.

Pigments are molecules that bestow color on plants, algae and bacteria, but they are also responsible for effectively trapping sunlight. Pigments of different colors absorb different wavelengths of light. Below are the three main groups.

Photosynthetic eukaryotic organisms contain organelles called plastids in their cytoplasm. According to Cheong Xin Chan and Debashish Bhattacharya of Rutgers University (Nature Education, 2010), the double-membraned plastids in plants and algae are referred to as primary plastids, while the multiple-membraned variety found in plankton are called secondary plastids. These organelles generally contain pigments or can store nutrients. In “The Cell: A Molecular Approach 2nd Ed” (Sinauer Associates, 2000), Geoffrey Cooper enumerates the various plastids found in plants. Colorless and non-pigmented leucoplasts store fats and starch, while chromoplasts contain carotenoids and chloroplasts contain chlorophyll.

Photosynthesis occurs in the chloroplasts, specifically, in the grana and stroma regions. The grana are the innermost portion of the organelle; a collection of disc-shaped membranes, stacked into columns like plates. The individual discs are called thylakoids. It is here that the transfer of electrons takes place. The empty spaces between columns of grana constitute the stroma (The Cell: A Molecular Approach 2nd Ed, Sinauer Associates, 2000).

Chloroplasts are similar to mitochondria in that they have their own genome, or collection of genes, contained within circular DNA. These genes encode proteins essential to the organelle and to photosynthesis. Like mitochondria, chloroplasts are also thought to have originated from primitive bacterial cells through the process of endosymbiosis.
“Plastids originated from engulfed photosynthetic bacteria that were acquired by a single-celled eukaryotic cell more than a billion years ago,” Baum told LiveScience. Baum explained that the analysis of chloroplast genes shows that it was once a member of the group cyanobacteria, “the one group of bacteria that can accomplish oxygenic photosynthesis.”
However, Chan and Bhattacharya (Nature Education, 2010) make the point that the formation of secondary plasmids cannot be well explained by endosymbiosis of cyanobacteria and that the origins of this class of plastids are still a matter of debate.

Pigment molecules are associated with proteins, which allow them the flexibility to move toward light and toward one another. A large collection of 100 to 5,000 pigment molecules constitutes “antennae,” according to Vermaas. These structures effectively capture light energy from the sun, in the form of photons. Ultimately, light energy must be transferred to a pigment-protein complex that can convert it to chemical energy, in the form of electrons. In plants, for example, light energy is transferred to chlorophyll pigments. The conversion to chemical energy is accomplished when a chlorophyll pigment expels an electron, which can then move on to an appropriate recipient.

Learning about the two types photosynthesis and their purposes will now allow us to understand Photosynthesis. The natural cycle to preserve soil naturally. By using Permaculture, the system will increase the Photosynthesis cycle without using chemicals. Hence increasing and preserving your soil.