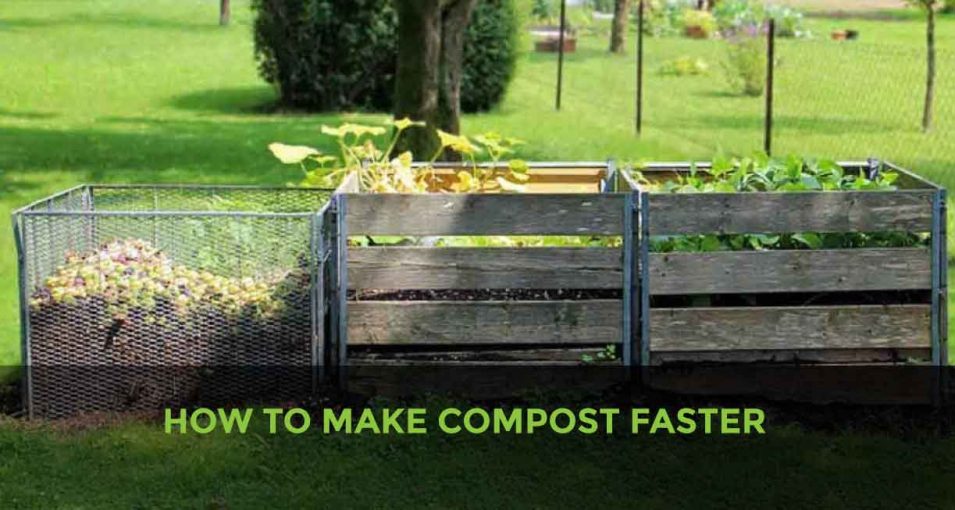 How To Make Compost Faster

Compost is the end-product of the decomposition process of organic matter; this is the simplest compost definition I know!

Compost creation works to speed up the decay of natural materials, by providing the ideal conditions for detritus-eating organisms to thrive.

The result of composting is nutrient-rich soil that sustain your entire permaculture system.

How To Make Compost: Main Elements To Consider

Organic materials used for compost should include a mixture of brown (carbon-rich) and green (nitrogen-rich) materials.

In the utube video below from GrowVeg.com, they demonstrate how to make compost from the ingredients you have at home.

The relative proportion of carbon and nitrogen is called the carbon-to-nitrogen ratio – C:N ratio.

According to the Washington State University, following are some sample C:N ratios of organic matter:

Organisms that decompose organic matter need more carbon that nitrogen; they use carbon as a source of energy and nitrogen for building cell structure.

The C:N ratio is a critical factor in composting to prevent both nitrogen robbing from the soil and conserving maximum nitrogen in the compost.

If there is too much carbon material in the compost, decomposition slows and microorganisms draw any available soil nitrogen in the proper proportion to make use of available carbon.

This is known as “robbing” the soil of nitrogen, and delays availability of nitrogen as a nutrient for growing plants.

Decomposition takes longer, however, when the initial C:N ratio is much above 30.

When the carbon is less than that required for converting available nitrogen into protein, organisms make full use of the available carbon and get rid of the excess nitrogen as ammonia.

This release of ammonia to the atmosphere produces a loss of nitrogen from the compost bin and should be kept to a minimum.

Which Is The Best C:N Ratio?

Since organisms use about 30 parts carbon for each part of nitrogen, an initial C:N (available quantity) ratio of 30 promotes rapid composting and would provide some nitrogen in an immediately available form in the finished compost.

Researchers report optimum values from 20 to 31.

A majority of investigators believe that for C:N ratios above 30 there will be little loss of nitrogen.

These reported optimum C:N ratios may include some carbon which was not available.

Composting time increases with the C:N ratio above 30 to 40.

If unavailable carbon is small, the C:N ratio can be reduced by bacteria to as low a value as 10.

Fourteen to 20 are common values depending upon the original material from which the humus was formed.

These studies showed that composting a material with a higher C:N ratio would not be harmful to the soil, however, because the remaining carbon is so slowly available that nitrogen robbery would not be significant.

How To Calculate The C:N Ratio?

You can determine the C:N ratio (and decide what to put in a compost bin), using this calculation system from the Cornell University.

Just enter the mass of each material (wet weight), percentage of carbon, nitrogen, and moisture, then click on the calculate button.

At this link you can learn how to determine moisture of your compost.

In the tube video below, you will learn the basic concept in regard to moisture, temperature and oxygen.

You need to use a termometer to verify the optimal range of temperature (55-65°C) is respected.

You can determine proper moisture content performing the official squeeze-ball test demonstrated in the utube video below:

How To Make Compost

Follows a collection of utube videos that explain several effective fast composting methods you can use in your permaculture system.

I highly recommend to watch all of them to understand some of the possibilities you have.

Another way to make compost is using chickens, as explained in this article.

Composting is an art.

There are many ways you can follow to produce high quality compost.

It’s very important you learn the basic knowledge behind compost.

You also need to understand some of the most effective composting systems and adopt the one that fit with your specific situation and attitudes.

The difference in the final result depend on your practice!

You can also produce Compost Tea Easy, with the Compost you produced!

You could distribuite your Compost Tea using Ollas!

To learn the basic of composting click this link