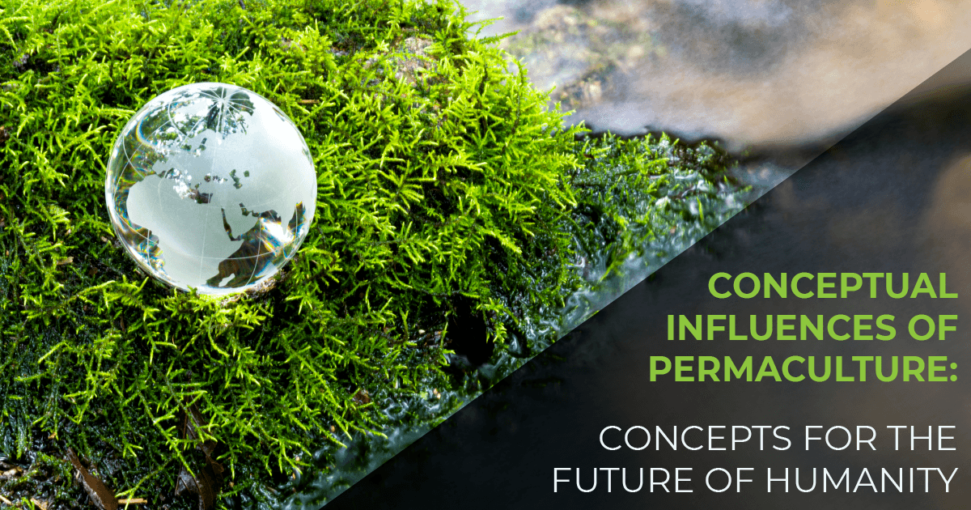 Permaculture is based on some influences including permanent as sustainable and perennial, system ecology and Keyline design.

The assumptions on which permaculture was originally based are:

​Permanent as sustainable and perennial

The term permaculture was derived from the words permanent agriculture, which, according to Russell Smith, connotes agricultural systems that incorporate a high proportion of perennial species. Mollison and Holmgren, just like Smith, emphasize the importance of tree crops for soil stabilization in hillside agriculture, production of fodder, and the production of complementary and staple foods for human consumption. The scope of permaculture later expanded from the design of smallholder agriculture to include human settlement more broadly, and “permanent agriculture” was, therefore, redefined as “permaculture.”

J. Russell Smith (1874–1966), a professor of geography at Columbia University, is the author of the book, Tree Crops, A Permanent Agriculture (written in 1929, with an update in 1950), where he described the value of tree crops for producing food and animal feed on sloping, marginal, and rocky soils as a sustainable alternative to annual crop agriculture.

Smith wrote his book prior to the Green Revolution, a period that reduced the perceived need to develop new crops for expanding future food production. During the period from 1950 to 2004, world grain production more than tripled, soybean production increased nine times, and meat production increased almost five times. Many agricultural products were thus made available at the lowest inflation-adjusted cost in human history, making the development of tree crop agriculture, appear less urgent. In addition, and of equal importance, tree crop agriculture does not lend itself to an industrial agriculture model as well as annuals do.

Since 1950, however, the world’s population has risen from 2.6 billion to 7 billion. Along with population growth and prosperity came major increases in demand for energy, which has been met with a substantial rise in the consumption of fossil fuels. This increased use of fossil fuels, combined with widespread deforestation, unwise tillage, overgrazing, and erosion of soils, has dramatically increased the level of carbon dioxide and other greenhouse gases in the atmosphere.

As Smith envisioned, advances in tree and other perennial crop breeding have the potential to dramatically increase the world’s sustainable food production capacity. This can be achieved by developing a variety of perennial species, including trees and perennial grasses, to produce nutritious food on farmlands unsuitable for sustainable production of annual crops. Planting these lands with  perennial crops would return some or many of the environmental and ecological services once provided by the nature. Perennial crops can also be produced in home gardens, edible landscapes, parks, waterways, and along roadsides, as well as in small towns, suburbs, cities, and other places not currently growing plants for food. Overall, this approach could greatly increase and diversify food supplies, while providing a means to alleviate many of the environmental and ecological problems likely to arise if mid-century water and food needs are met using an expansion and intensification of our current agricultural system.

Permaculture emphasizes on whole systems design. This is strongly influenced by the work of H.T. Odum, an ecologist who developed the influential framework of systems ecology, i.e., a thermodynamic perspective that considers ecosystems as networks through which energy flows and is kept and transformed, which can be modeled and diagramed similar to electric circuits. The applied forms of systems ecology were referred to as ecological engineering. This design perspective later shaped the fundamental components of the permaculture perspective. Odum proposed an approach to the design of novel and productive ecosystems in which species are regarded as distinctive and interchangeable system components which should be collected from a global pool without regard to the place of origin.

In this view, therefore, the distinctive inputs and outputs of each species will connect in novel assemblages, and the exchange of energy and resources between system components will substitute for material inputs and human labor. Therefore, ecosystem designers should foster self-organization through the interaction of diverse species from the global species pool, for them to generate and select ecosystems which produce yields for human use with animal labor input. The influence of this focus on species selection practices, functional relationships between components, and the self-organization of systems is reflected throughout the permaculture literature and experience.

Keyline design shaped the approach taken by Holmgren and Mollison. Keyline design was developed in Australia by farmer and engineer P. A. Yeomans, and described and explained in his books The Keyline Plan, The Challenge of Landscape, Water For Every Farm, and The City Forest. The Keyline teaches how soil fertility can be rapidly, permanently and cheaply enhances and how the topography of the land can build that fertility and additionally how to plan the farm layout. It uses the form and shape of the land to determine the layout and position of farm dams, irrigation areas, roads, fences, farm buildings and tree lines.

The keyline design system considers the following farm elements, ordered according to their degree of permanence (the system is also known as the Yeomans’ Keyline Scale of Permanence),  when planning the placement of water storage, roads, trees, buildings and fences:

The term Keyline comes from the reference to a “keypoint”, a point in the land where the lower and flatter portion of a primary valley floor suddenly steepens. The geometry of topography allows effective cultivation lines to be established for more even spread of water in the soil. The development of new chisel plow designs for use in the system allows non-inversion cultivation to effectively capture and move water out from moist valleys to drier ridges, thus creating a more even distribution of water that traverses through the soil at a slower rate. This is also very effective in counteracting compaction and promote deeper rooting in the soil.