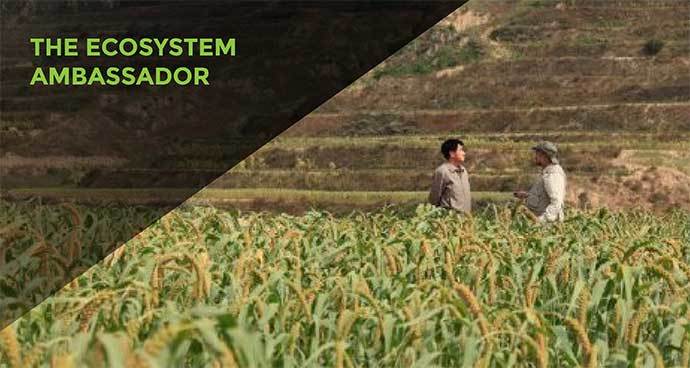 Today I would like to introduce John D. Liu to you. He is an intelligent, humble and well-presented man.

He has researched and documented so much work on the topics of degraded landscapes and climate change.

Especially on the work of restored ecosystems around the world.

His work has influenced many and is the main cause of the establishment of the Ecosystem Restoration Camps movement.

Of which the first project is already up and running in southern Spain.

If it was not for the work he had done in China, documenting the restoration of the Loess Plateau.

I do not know if I would be where I am today.

I came across the documentary “Lessons of the Loess Plateau” while doing research for an essay I had to write for my studies.

After watching, I was amazed by the effort done and had hope in my heart.

I realised that it is possible to reverse the destruction caused by man on the natural environment.

Through following his work and efforts I came across the World Permaculture Association (WPA).

This is where I attended a couple of Permaculture courses.

On each course, Giuseppe Tallarico had taken the liberty to organise a video conference interview with John.

We were given the privilege to listen to John´s story and question him on all topics possible.

The inspiration I have gained from John, has developed me from being a student to becoming a colleague within the WPA.

Moving steps forward to creating a greener, sustainable tomorrow for every species on the planet.

Alongside promoting that we are able to reverse the damage we have caused on the planet.

The Great Work of His Time

John is actively busy in spreading the word of the Ecosystem Restoration Camps, which is attracting new members every day.

However, there is so much more of his work we can reflect on. After 15 years as a Television Producer and Cameraman for CBS News, RAI and ZDF, he began to study ecology in the mid-1990s.

Over the years he has produced, directed, written and presented numerous films. Currently, he is the Ecosystem Ambassador for the Commonland Foundation and Visiting Research Fellow at the Netherlands Institute of Ecology of the Royal Academy of Arts and Sciences (NIOO/KNAW) [Academia 2018].

These films, and many articles are all available on John´s Academia page or can be found on Youtube.

I can highly recommend that everyone watch the work he has documented as it will open your eyes to the amazing potential we, as a species, can collectively act on.

“Green Gold” is also where you will see the initiatives taken in Jordan.

Restoring the degraded landscapes with a Permacultural approach, thanks to the amazing work done by Geoff Lawton.

The Ecosystem Restoration Camps is a project that was instigated by the thoughts of John D. Liu.

The concept of Ecosystem Restoration Camps emerged during a Permaculture Design Course organised in May 2016 by the WPA where Giuseppe Tallarico invited John as a speaker.

I can clearly remember waking up one morning, about two years ago, and having the first post on my Facebook page being from John asking people if they would be willing to join in collective action of restoring ecosystems.

Today it has grown into a large movement of people who are giving their support, be it financially or physically on the ground.

It is a grassroots movement of everyday people, assisting in their knowledge, tools, and experience in restoring degraded landscapes.

I am too a member and proudly donate to their cause, and hopefully soon will help in applying my knowledge gained.

Charl Laing is a dedicated individual which strives to help others in promoting positive environmental actions. He was introduced to the concept of Permaculture many years ago, and through his studies in becoming an Environmental Manager, he has grown more of a passion to the use of Permaculture as being the solution to many environmental problems. Today we face many environmental problems of which the majority are caused by the actions of humans. Water scarcity, food insecurity, irregular weather patterns, natural disasters are only a few to mention however, many of us are not aware of the fact that our actions are the cause. Thus, his contribution in his writings is to bring awareness to everyone on how we humans have degraded the Earth´s landscapes and how Permaculture can be used as the solution to remedy these problems. He has attended multiple courses offered by Giuseppe Tallarico and the World Permaculture Association, of which many concepts came to light to him. He had this inner feeling that somehow he needs to become more involved and now from being a student, he has become a proud colleague of the World Permaculture Association.