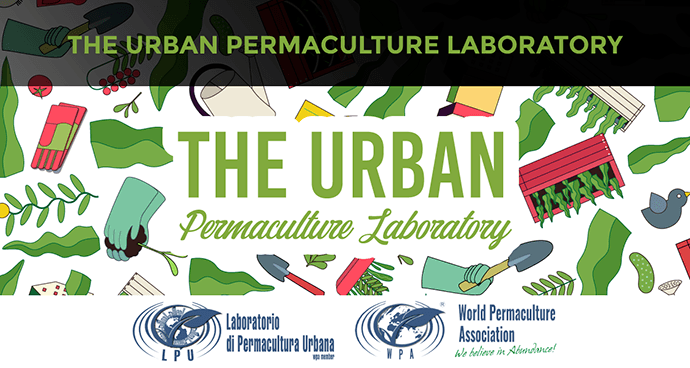 The world population is rising rapidly, and society’s current consumer ways are aiding in the rapid depletion of the Earth’s precious resources. However, there is a solution to mitigating this problem.

My experience at the corporate level of industrialized farming has shown me the ineffectiveness of this system and the destruction that it causes. Thus I have felt that it is my moral obligation to promote the effectiveness of Permaculture. Today I will discuss with you how Permaculture can be implemented in an urban setting. I can show the success of the WPA Urban Permaculture Laboratory in Catanzaro, Italy.

Farming and producing your food no longer needs acres or hectares of land. Every one of us needs to fill our moral obligation of producing more than we are consuming. Once you think outside the box of industrialized farming the options of producing in a limited space is endless.

How and Where can Permaculture be  Implemented?

Permaculture teaches us that we should observe our environment holistically. Through this observation, you´ll see that urban areas have many spaces with edges and heights that can be used to grow food. You can start implementing Permaculture on balconies, rooftops, walls, public spaces, sidewalks, private gardens, etc. Growing your food also gives you a sense of accomplishment, pride, and joy, that will make you eager to want to learn and grow more. However, if you think that the space you have is too small, I can recommend a book written by Juliet Kemp called “Permaculture in Pots.” Which focuses on people who have, at most, 4 square meters of space on their balcony.

If your implementing Permaculture in a limited space, Share your ideas!  Put in the comments your unique ideas of how to produce more than you consume. The only way to success is becoming self-sufficient through sustainable actions no matter your location.

“Managing urban areas has become one of the most important development challenges of the 21st century. Our success or failure in building sustainable cities will be a major factor in the success of the post-2015 UN development agenda.” said John Wilmoth, Director of UN DESA’s Population Division.

WHY FOCUS ON URBAN PERMACULTURE?

How do we feed the world’s growing population?

Today, 54 percent of the world’s population lives in urban areas, a proportion that is expected to increase to 66 percent by 2050. Projections show that urbanization combined with the overall growth of the world’s population could add another 2.5 billion people to urban populations by 2050, with close to 90 percent of the increase concentrated in Asia and Africa, according to a new United Nations report launched.

The problem with the increased expansion of urban areas is that development usually happens in ecologically sensitive areas. Urbanization destroys development on arable, fertile lands, destroying the habitats of vulnerable species, and increases pollution. Thus we need to seek alternative ways on how to save the current and future situation. Urban permaculture can provide a haven for many bird and insect species while producing food for ourselves and others. Urban permaculture can also transform current and future development into a direction that works with existing ecosystems. Additional benefits will minimize disturbances to habitats,and will help to create a more sustainable society.

As mentioned earlier, Permaculture teaches us to view our environment holistically, and through this approach, we will be able to see that there is more value attached to our surroundings than we could ever have expected. However, Let’s take a deeper look at just one city

The New York metropolitan area also referred to as the Tri-State area. As of July 2015, the United States Census Bureau estimated the population of the New York City metropolitan at 23,723,696. Which was an increase of 647,032 from 2010 (1). The New York Metro Area is the most populated area in The United States. The way cities have grown destroyed by, claiming arable land, destroying habitats, displacing species, and increasing pollution. Not just in New York but cities worldwide. With larger populations of people in the Urban areas, we need to have everyone supporting a system that works with the environment rather than against it. The only way we will have the resources to support another 2.5 billion people by 2050, is by making more sustainable and regenerative actions.

I have introduced you to My Urban Permaculture Laboratory in other articles, Prickly Pear and Mission Propagating Vetiver Plant.

On the Urban Permaculture laboratory site, biodynamic urban gardens; with fruit trees and wood, hedges of ornamental plants, cultivation of medicinal species, wicking beds, aquaculture, and aquaponic systems are in place, with many more activities.

At the site, you can create networks to save seeds, and At the site, you may come and collect seeds to add to your collection, from the large variety of fruits that are available to anyone who is interested.

There are communal composters where organic waste is composted, using various techniques for the production of compost and bio-fertilizers. I have recently have written an article on the vermicomposting system I use.

The supply of electricity is via a 6-kW photovoltaic system; innovative solutions for energy and water management. Also, pragmatic experimentation takes place in which new techniques and tested that include:

Today, I want to bring The Urban Permaculture Laboratory front and center stage with a video from John D. Liu.

Greetings in the name of sustainable living through urban permaculture! This is a great initiative to create diverse, vibrant urban communities. Yes, most cities are not making effort for solutions but investing their energy in treating the symptoms of urbanisations. Therefore, with these inspirational efforts, we can do and share and live a very sustainable and resilient urban life! Thanks for the good effort!