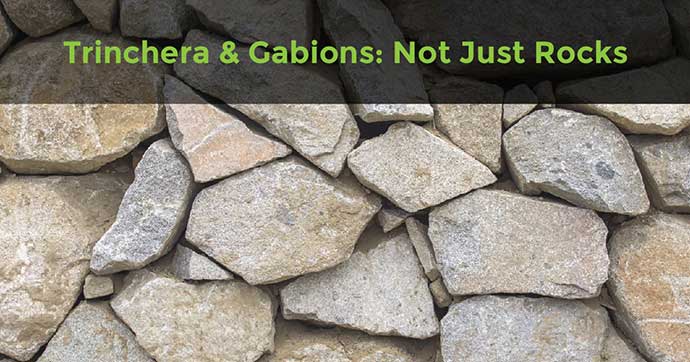 Trincheras And Gabions: Not Just Rocks

Trincheras and Gabions: We are going to go Rock Crazy with them!

In the desert areas of Earth, these huge rock walls are used to preserve seasonal rainfall.

In desert areas, a big percentage of the total yearly rainfall will fall in a very short period (hours).

When large amounts of rain come to a torrential pour down, it causes extreme incidents of erosion.

Trincheras have been found centuries back in ancient Mexico.

The design of the Trinchera is very important because they are free-flowing structures.

In the design, you have to focus on the slope and contour of the land and stream bed.

The most important part of the structure is a steady base.

When designing your Trinchera, you also need to make sure that the lowest part of the land is in the middle of the structure.

The main difference between a Trinchera and a Gabion is that a Gabion isn’t free-flowing.

The rocks in a Gabion are smaller rocks constructed in cages or wire baskets to build a wall.

Gabions don’t stop the water from passing through.

They filter out debris, slowing down the water flow, allowing filtration, retaining the moisture into the soil, and reversing the evaporation.

The most important thing to take away from the Gabion as a water harvesting method is that it will retain its loom.

This is the key because of the loom contains the most fertile soil.

Step by Step How To Assemble A Gabion

Trincheras, Gabions, And Swales Together?

Have you thought about adding Swales with Gabions in the same rainwater harvesting design?

In this video, Geoff Lawton (7 minutes in) combines on-contour swales and Gabions to create a better rainwater harvesting design.

Going through this series was so important for me, being able to share rainwater harvesting methods with everyone, so together we can help reverse desertification.

One of the reasons putting together and teaching at the World Permaculture Association’s Permaculture Design Course is so important is because with each person in every class there are two more hands in the soil dedicated to making a change!

QUESTION(S) OF THE DAY: WHAT WAS YOUR FAVORITE QUOTE OR LESSON FROM THIS RAINWATER HARVESTING METHOD? PLEASE LET US KNOW IN THE COMMENTS