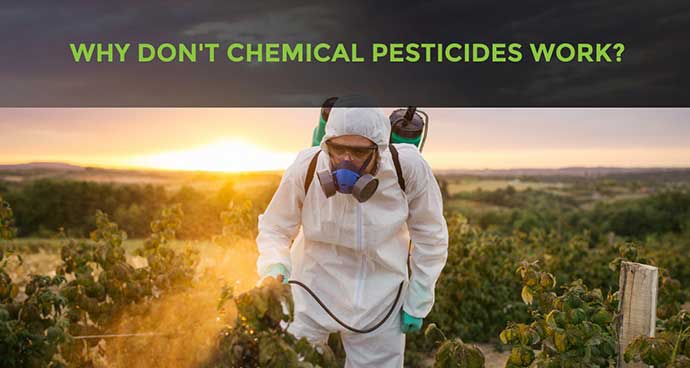 When you go to start planting your seeds do you hesitate thinking back to last year?

Yet each year there’s still insects, weeds, rodents and bacteria attacking your crops?

Year after year your spraying more and more expensive chemical pesticides and they work less effective year after year?

Rhynchophorus ferrugineus is an insect that attacks many types of plants, particularly palms, and will grow in the infested plants.

Identifying a suitable palm, males will then release a pheromone aggregation that will be able to attract many insects, in order to promote reproductive success.

The females will then lay their eggs in holes in the parts that offer less resistance, which then will give rise to larvae in about three days.

All these new insects will begin to devour the soft tissues of the plant by digging very deep tunnels, which can undermine the stability of the palm.

Different systems that are used: endo-therapy, spraying the foliage and root absorption.

To get results these are often used in combination with each intervention, and in particular endo-therapy and spraying foliar.

The endo-therapy is a special technique that uses the transport of the solution from the roots to leaves using suitable equipment and injectors are injected into the vessels wire solutions of insecticides, fungicides and/or nutrients.

The problem is that if you don’t treat ALL the palms monthly the insects will come again.

The insects will then become resistant to insecticides so you have to change the chemical and increase the concentration of the chemical.

This is the start of your run on the Chemical Pesticides Treadmill race.

This is done in farming as well as in urban cities which pollutes your air, your water, and your food supply.

Pesticides are projected to reach 3.2 million tons by 2019 in the global market.

That’s a 6.1% increase since 2014 an increase in a market that’s polluting our air, water, food and killing off our pollinators.

According to Chemical & Engineering News, BASF, Syngenta, Bayer, Dow, and DuPont are competing to fill “the glyphosate gap” which is a gap that’s growing fast because at least fourteen weed species on five continents have developed resistance due to massive applications of glyphosate.

As a result, farmers must employ more toxic chemicals to kill the resistant weeds.

Commonly known as the “pesticide treadmill,” it’s a classic case of chasing a new techno-fix to mop up the mess of an older, failed technology.

Agrochemical giants prefer to describe the resistance problem as a business opportunity: In the words of Syngenta’s Crop Science CEO, John Atkin: “Resistance is actually quite healthy for our market because we have to innovate.”

This paragraph was taken from Millions Against Monsanto where they break down the top companies in the pesticides market a lot of the big hitter companies are also in the seed market.

World Permaculture Association stood together with organizations and people from all around the world to stand up against Monsanto and their Chemical Pesticide Treadmill.

Farmers are running on this chemical pesticide treadmill just to keep their farm and crops to be overtaken by superweeds and insects.

Every time you apply these chemicals to your crops you’re on a higher speed on this never-ending Chemical Pesticide Treadmill.

These higher speed levels are funding the chemical market that’s poisoning your food, air, and water.

Their response needing to increase the harmful chemicals due to resistance is a good market and innovation within.

Stop Running! Get off of the chemical dependency machine. 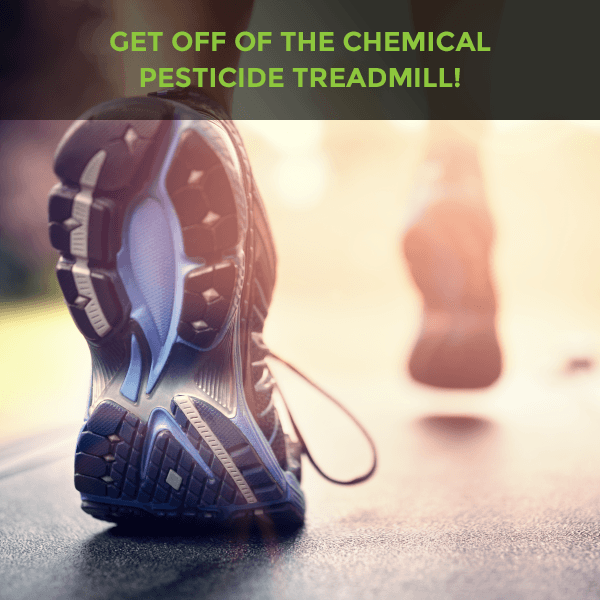 Permaculture as a Pesticide Solution

The key to getting off the Chemical Pesticide Treadmill is fertile soil.

If you have fertile soil then your plants will not become weak and vulnerable.

Multiple techniques including the No- Dig Method, Composting, Biodynamic Preparations, Effective Microorganisms, and Compost Tea can increase your fertile soil.

You also want to make sure your design is the most effective.

The right design will concentrate on the right connections between several elements also by using companion planting systems within.

The right design will contain a lot of aromatics such as flowers and legumes.

The more chaos to the five senses, the healthier the soil which diminishes the need for chemical pesticides.

However, companion planting systems may have an increase in cost for harvesting because of the multiple crops and their harvesting requirements but, please take in consideration that you will be saving on chemical pesticides.

We as a society definitely need to envision a change in the Chemical Pesticides usage before it’s too late.

In an earlier blog post of mine Building A Holistic Economy: The Permaculture Way, I address past concerns of Permaculture being unattainable.

I am here to say Permaculture is attainable as a solution.

There are healthy and effective practices that I and other farmers are using to bring back the natural cycle of ecology and a farming solution without harsh chemicals.