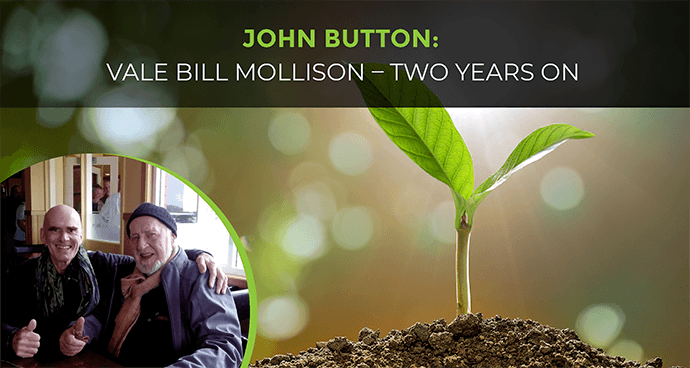 It’s already two years since Bill Mollison passed away; how many times I’ve thought of him in that time.

He was a master of systemic recognition and using that recognition to create highly productive sustainable human systems.

He was also a master of provocation, not always diplomatic, and sometimes those two qualities did not serve well to promote the cause of Permaculture when he delighted in the controversies his sharp tongue drew out.

Perhaps he was justified though if there is the truth that ‘any publicity is good publicity.’

Certainly, Permaculture would not disappear, though many tried to ignore it, and others deeply criticized.

When I did my first workshop with Bill almost 40 years ago, we were just a small bunch of largely ‘alternative’ young folk, enthused by his proposal of the intertwining of plants and animals and structures in a harmoniously beneficial matrix of designed relationships.

That it could work was spectacularly confirmed by the rich abundance of the site on which the workshop was being held.

When the couple responsible for the abundance had begun, the landscape had been an ocean of exotic weeds.

Within five years, fruiting species occupied every layer from root crops, through groundcovers, shrubs, vines and canopy species, shade and sun-loving plants positioned according to their own favored microclimate.

Poultry carefully managed to benefit from their positive characteristics and avoid their damaging ones.

We participants were easily convinced by such proof.

Bill Mollison’s explanation of its functioning, was made with the superb blending of a master of systems with an extraordinary raconteur.

A Few Years Ago

A few years ago at the International Permaculture Convergence, we were over 120 nations all sharing a treasure of experience.

What an extraordinary growth, and testimony to the genius of Permaculture, its importance to the healing of our planet with its load of human-sourced problems.

As Bill Mollison said – wisely and provocatively – The Problem is the Solution.