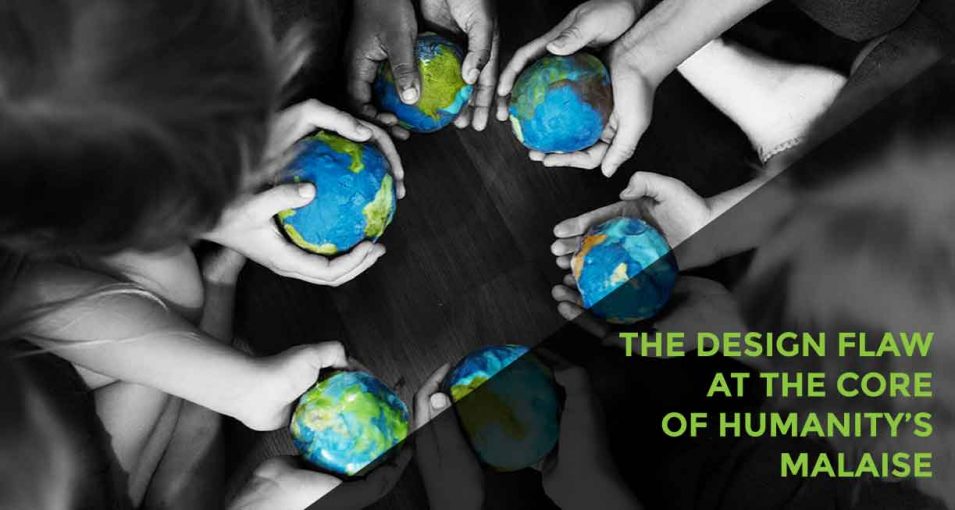 The Design Flaw At The Core Of Humanity’s Malaise

Many of us—read: anyone paying attention—are worried about problems like climate disruption, biodiversity loss, toxins in our foods, income inequality and the hollowing out of towns.

Such troubles seem impossible to solve, hopeless to untangle.

But maybe our woes are not so complicated.

Perhaps these interrelated challenges stem from a basic design flaw.

And we can fix it.

I contend this messy moment reflects the fact that our “operating system” is outdated and not suited to our current circumstances.

I’m talking about the economy: the system that runs our society’s conceptual software.

For the way that we produce, trade, value and distribute goods and wealth interferes with our ability to address the major trials of our time.

We have come to accept the present framework as inevitable, but that’s far from the case.

The rules our economy plays by are not natural law, like gravity or the properties of the Periodic Table.

Rather, they are the result of human decisions, the consequences of which were not apparent at the time.

There is stark irony in the fact that the stock market has soared while large chunks of the country have been covered by water from hurricanes or ash from wildfire.

This suggests the gaping disconnect between finance and reality.

There’s something screwy with the books when economic indicators rise in tandem with environmental calamity and loss of life and property.

It’s reminiscent of the “big short”, when financiers bet and made money on failure in the housing market.

If Wall Street’s got its numbers right, Earth futures are not looking so good right now.

One defect in our economic model is its dependence on growth.

We know that resource and ecological limits dictate that we can’t grow indefinitely.

And yet, because money is created by debt that must eventually be paid, the growth imperative is baked into the system.

Economists have evaded the social and environmental costs associated with relentless growth by choosing not to count them.

In a deft accounting trick, the negatives linked with profitable enterprise (like water and air pollution, landscape degradation, blighted downtowns) are deemed “externalities”.

Again, this is a design flaw, which can be mended by internalizing such costs so that they are borne by the entity that creates the problem instead of by the public.

Understanding faulty design at the root of our economy can help clarify certain kinds of conflicts that frequently arise.

Let’s take a scenario where an energy company wants to drill in a pristine area and that this will harm vulnerable species, increase greenhouse gases and disrupt local communities.

The company claims the environmental damage is a small trade-off for boosting the economy and creating jobs.

A functioning system wouldn’t require people to give up their assets and autonomy in order to be economically viable; indeed, those assets and agency are their basis of wealth.

It has become standard to see such scenarios through a political lens—a matter about which “liberals” and “conservatives” hold different views.

Instead, we can regard the fact that companies profit amidst human and environmental exploitation as a glitch in the system that could bring the whole thing down, like a kind of malware.

If we’re going to grow, let it be natural wealth.

Conventional economics is fueled by scarcity; too much productivity drives down prices and therefore competition.

We’ve been mining our natural capital for so long—and with bigger and more destructive technologies—that we have forgotten how productive healthy ecosystems can be.

We can think of the scarcity premise as part of an obsolete operating system.

An upgrade dedicated to building our resources will bolster security and create the conditions for abundance.

Not what one wants in an operating system.

Our upgrade corrects that little hiccup so that farmers are rewarded for enhancing soil health, which in turn enhances water retention, biodiversity, and all-around resilience.

Once you’re attuned to the fundamental design errors, you’ll find evidence all over.

For instance, we now have youth un- and under-employment (and resulting despair) and, at the same time, the emptying out of vast areas of the country.

This is a major bug in the software.

Fix it, and there could be incentives to learn and apply regenerative agriculture to degraded landscapes and languishing rural communities.

The legal system, for example, provides recourse for infringements on private property—but not necessarily for resources that we all share, like air, water, forests and soil.

Talk about hacking the vulnerabilities in the system.

It may seem risky to modify programming at this scale.

But recall the Y2K bug everyone was worried about, and how the rollover went smoothly.

In an interview, author Raj Patel, who most recently co-wrote “A History of the World in Seven Cheap Things: A Guide to Capitalism, Nature, and the Future of the Planet,” said that many people find it easier to imagine the end of the world than the end of capitalism.

We need to appreciate the difference between human-devised systems—which, by definition, are negotiable—and the exigencies of nature, which are not.

We need to understand that society’s working “software” was developed during a unique time of geographical expansion and rapid technological change, and that its algorithms neglected human, cultural and environmental costs.

We can choose to tweak or outright transform this model.

Among several options: bring externalities into pricing and incorporate the value of ecosystems, as in The Economics of Ecosystems & Biodiversity initiative, which seeks to “make nature’s values visible; an emphasis on the Global Commons, as articulated by Johann Rockström of the Stockholm Resilience Centre; and recognition of the Rights of Nature, as has been instituted in Ecuador and Bolivia and applied to rivers in India and New Zealand.

Here’s a bold statement: If we place value on ecosystem function, we could turn around our environmental, social and economic problems and inequities right now.

Businesses and policymakers would be motivated to preserve and enhance environmental conditions, rather than be heedless.

Indigenous people would be respected for their ecological knowledge and practices.

Entrepreneurial energy would shift away from the making and marketing of products no one really needs and toward creative ways of regenerating ecosystems: which, in turn, restore nature’s climate-regulating processes.

An industrial agricultural model that wreaks havoc on landscapes and communities would give way to agroecological approaches like Permaculture, Holistic Management and agroforestry that rebuild natural and social wealth.

What we need is the intention—and a design framework that supports human and ecological wellbeing.

Recognizing the design flaws in our default programming is the first step to envisioning what is possible.

Let’s not forego the chance due to a failure of imagination. Or of courage.

This work is licensed under a Creative Commons Attribution-Share Alike 3.0 License

A longtime journalist who lives in Vermont. Her most recent book, "Water In Plain Sight: Hope for a Thirsty World" has just been published by St. Martin's Press. Her previous book is Cows Save the Planet.