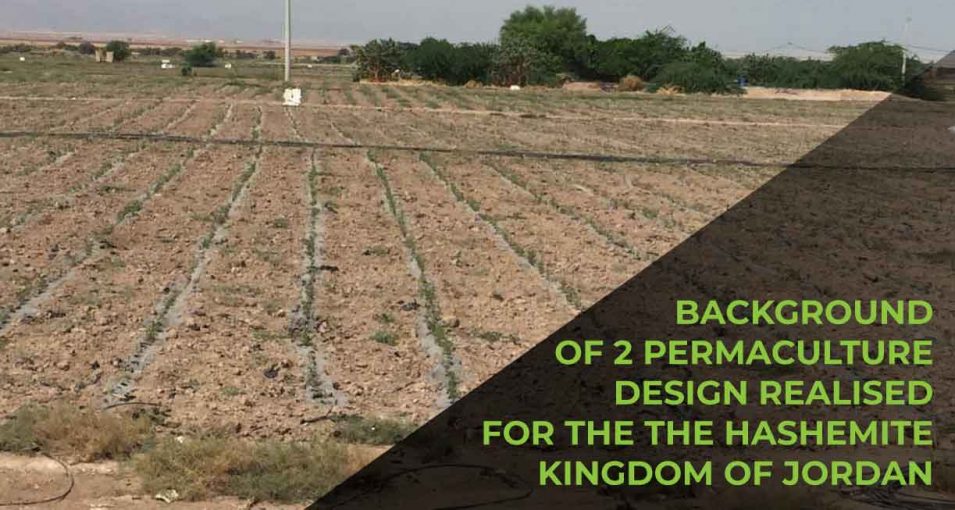 Note: This content was arranged by the Giuseppe Tallarico Professional Agriculture Office Team (Giuseppe Tallarico – Team leader and the Designers John Button, Rhamis Kent and Riccardo Tucci), as part of the consultation delivered to the National Agriculture Research Centre of Jordan, for the project of the Ministry of Planning and International Cooperation of Jordan “Designing of two (2) pilot permaculture sites in Jordan” (Ref.: Tender No. EPP-CCP-04/2017), having the goal to develop Permaculture farms in the country.

This project intends to demonstrate the viability of implementing permaculture methods, strategies, and techniques as means to improve agricultural outcomes, ecological conditions, and of helping local farmers in the Jordan Valley region to find effective solutions for their most pressing problems.

The impact of climate change events that are increasing in frequency and severity, invariably falls heaviest on the most marginal farmers, and so, appropriately, this is a major focus of these contributions to improve the situations of such farmers.

The outcomes of the activities associated with these experimental designs will demonstrate the potential for improving livelihoods and living conditions of farmers in the Jordan Valley using permaculture-based approaches coupled with the utilisation of appropriate technologies dependant upon the application of context-specific agricultural patterns and practices.

The objective is to achieve sustainable use of soil, water, energy, plants, animals and other biological resources through the well-considered implementation of integrated design.

This will be built upon a foundation of integrated environmental management systems of regenerative agricultural practices and renewable resource utilization.

In assessing the current situation facing farmers in the Jordan Valley, there are a number of variables that make identifying solutions especially challenging.

It is an unusual mix of factors that combine both the expected physical constraints related to landscape and climate with certain policy measures that add another layer of complexity.

Quoting from the 2016 World Bank Group Water Partnership report “The Cost of Irrigation Water in the Jordan Valley”:

Jordan is one of the most water-stressed countries in the world. Its annual renewable resources of 145 cubic meters per capita are far below the threshold of severe water scarcity of 500 cubic meters. The competition among water needs for irrigation, industrial and domestic uses, wetland protection, and in-stream habitat needs continues to pose serious challenges in Jordan. As a result of this competition, the available fresh water for farmers in Jordan, and more specifically farmers in the Jordan Valley, has declined. The five-year moving average dropped from 155 million cubic meters in 2003 to 131 million cubic meters in 2009. The drop in fresh water has been accompanied by an increase in treated wastewater, which although assisting in maintaining access to water for agriculture, has had an impact on the quality of the available water. Nevertheless, the total crop area has increased from 28,000 hectares in 1994 to 34,300 hectares in 2012.In the past 20 years, agricultural productivity in the Jordan Valley has increased despite the sector’s major water resource constraints. The increased reliance on new farming and irrigation technologies (most notably the introduction of greenhouses and drip irrigation technologies) and the expansion of the area planted have resulted in higher agricultural output. However, the forces driving these changes are weakening, and in 2012 and 2013 the country registered negative growth rates in the sector. In the Jordan Valley, this lack of growth also translated for the first time into a decline in crop productivity per dunum. Despite the modernization of agriculture in the Jordan Valley, cropping patterns have barely changed over the last 20 years. In 1994, the five major crops (tomato, cucumber, eggplant, squash, and potato) constituted 62 percent of the total cropped vegetable, whereas the share of these five crops increased to 70 percent in 2012. Banana has shown an expansion due to the crop’s artificially high prices resulting from import restrictions. Because the agricultural sector in Jordan is under stress, having registered negative growth in 2012 and 2013, any government policy to rationalize irrigation water subsidies should, where possible, try to increase the resilience of farmers in a comprehensive manner. The farming sector in the Jordan Valley will have to address issues related to, among others, the marketing of crops, and provide support to introduce new technologies that reduce the risks for farmers to change cropping patterns… In addition, the government should assess the impact of the irrigation water tariffs on poor farmers. The farmer survey found that 17 percent of the survey respondents could be classified as poor. Pro-poor farm policies can come in different forms, ranging from cross-subsidies in the irrigation tariff structure to direct income support to poor farmers. Because the number of poor farmers is very small, it is relatively easy for government to provide income support to poor farmers in the Jordan Valley.

Apart from the production systems listed above, field crops and other fruit trees constitute additional cropping patterns practiced in the Jordan Valley, under mixed farming conditions in the same farm together with the other predominant crops. In 2010, about 337,000 dunum were cultivated in the Jordan Valley, with an irrigation intensity of 99 percent (which remained quite stable during 2005–10).

The effect of water tariffs is not negligible, but since many farmers in the Jordan Valley are already suffering losses on the basis of current market prices, they are often not able to generate sufficient revenues to offset their production costs.

Other than farmers who grow dates, none of the farmers are able to generate profits (excluding numerations for labor and management).

Yet, when producer prices increase, the effect of a change in irrigation water tariffs can mostly be easily offset.

The Jordan Valley is struggling with its profitability due to the political conflict in Syria, which has an adverse impact on farmers’ ability to sell their produce outside the country.

With current irrigation water tariffs, and under current market prices, farmers in the Jordan Valley suffer losses of about JD 13 million per year.

If producers are able to fetch best market prices and conditions, the farmers in the Jordan Valley are able to consolidate a net gain of about JD 296 million per year using current irrigation water tariffs based on about 300,000 dunum of planted area under irrigation.

In either case, water costs make up no more than 0.3 percent of the total costs farmers incur to produce their crops.

It shows that banana—a heavily sheltered crop due to import bans—is the most productive crop in the Jordan Valley.

The production of dates, a crop recently introduced in the Valley, requires the trees to mature to generate positive net returns.

Vegetables are not very profitable as measured by net revenues, although vegetables grown in greenhouses yield better net revenues than those grown in open fields.

If farmer prices are high, the effect of any increases in irrigation water tariffs is negligible. Water productivity, measured as the water used per gross crop revenue under current survey prices, is highest for vegetables grown in greenhouses (JD 8.74 per cubic meter of water), followed by dates (JD 8.15), and then vegetables (mixed: JD 6.72), and open field vegetables (JD 4.71).

Banana (JD 1.36, supported by an import ban), citrus drip (JD 1.00), and citrus surface (JD 0.49) show much lower levels of water productivity. It is likely that farmers will be more driven by net revenues; hence, the importance of supporting measures that will increase revenues or decrease costs.

Banana’s water productivity is low, but it is an attractive crop for farmers in terms of net revenues.

Vegetables grown in greenhouses generate much higher levels of water productivity, but with the currently low survey crop prices and high costs, are not necessarily producing as much net revenues for farmers as banana.

Given the dynamics related to climate change and regional instability, efficiency of water use would seem to clearly be the obvious factor needing to be prioritized.

This is reflected in the proposed conceptual design for the test sites to follow.

Specifically, the crops providing the greatest water productivity should be advantaged.

Quoting from the European Council on Foreign Relations report “Testing the Water: How Water Scarcity Could Destabilise the Middle East and North Africa”:

“Consumption [of water]…remains expensive because, as with other countries in the region, the cost of Jordan’s water supply far exceeds the price that customers pay, a situation that incentivises irresponsible use.

“Unlike its Gulf counterparts, Jordan does not have the capital to rely primarily on non-conventional forms of water supply, such as desalination plants.

This means that Jordan has not fallen into the trap of quick-fix solutions, and has been forced to begin considering more sustainable means of water preservation.”

“The situation in Jordan reveals how countries that are water-scarce must pursue policies that aim to enhance both demand and supply in order to ensure sustainable water usage and achieve water security.

In the absence of a full suite of policies to deal with the issue, increased competition for scarce resources due to population growth or incoming refugees will turn water scarcity into a catalyst for domestic social unrest.”

It is not surprising that high-volume water crops such as banana and citrus are most affected by any changes in water tariffs.

In the case of banana and citrus crops that are irrigated by surface techniques, the farmers’ outlay for irrigation water will increase significantly. However, for most other crops, the effect of increases in the irrigation water tariff will be relatively limited.

The impact of the tariff increases on farmers’ incomes is in general moderate, because water costs make up only a small part of the total cost of farming.

Yet, as can be expected, certain cropping patterns will be much more affected by the tariff increases than others.

It is especially crops that tend to consume large volumes of water (citrus and banana), that will feel the impact of the irrigation water tariffs.

According to the cropping pattern simulations, citrus is not a crop that generates profits even now, with very low irrigation water tariffs.

Increasing tariffs will make these crops even more economically unlivable to grow, as has begun to show in the declining citrus production and, more recently, the decline in cultivated area.

In the case of banana, which benefits from import restrictions, only very large tariff increases (above JD 0.26 per cubic meter) will reduce the profit margin below 10 percent.

In 2012 and 2013, Jordan registered negative growth in the agricultural sector, while the productivity per worker also declined.

To increase resilience among farmers to deal with irrigation water tariff increases, the agricultural sector will have to address issues related to, among others, the marketing of crops, and provide support to introducing new technologies that reduce the risks for farmers to transition to other cropping patterns, since the effect of increases in irrigation water tariffs does affect farmers who grow vegetables much less than those who grow citrus and banana.

Challenges for the Jordanian Agricultural Sector