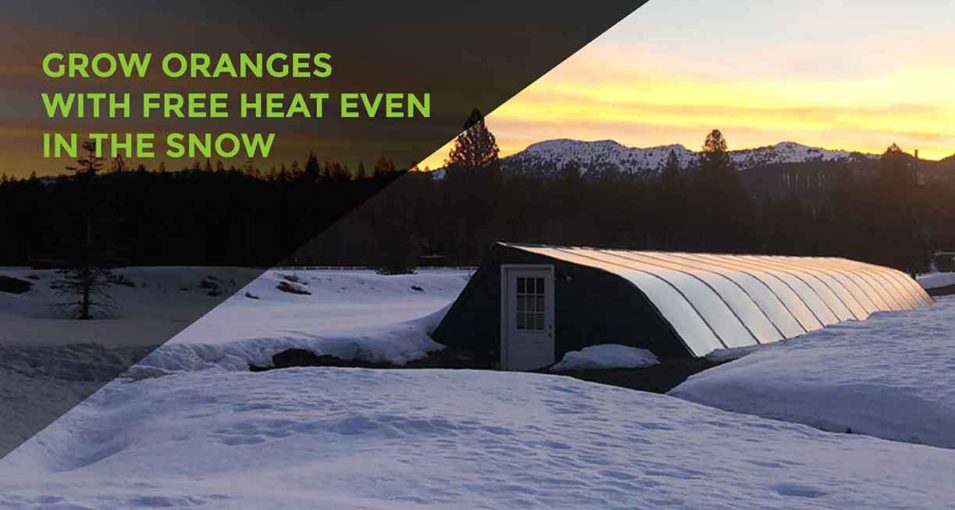 One of the topics that fascinated me when I attended my first Permaculture Design Course was: how can we modify microclimates to grow whatever we want in all possible conditions?

This is the most incredible story I ever heard on the topic.

It’s the story of a man, Russ Finch, who grows oranges in his backyard greenhouse without paying for heat.

But not only oranges, but he can also grow local and tropical plants:

He also is developing aquaponic and hydroponic systems to grow lettuces.

His system is operating in Nebraska where temperatures can drop to -20°F (the record low is -40°F/C).

He draws on the earth’s stable temperature (around 52 degrees in his region) to grow warm-weather produce in the snow and take advantages of the Sun (all free resources), combining the two things together in the design.

This is what we do in Permaculture: we combine different elements in synergy.

Finch first discovered geothermal heating in 1979 when he and his wife built it into their dream home to cut energy costs.

Eighteen years later they decided to add a greenhouse in the backyard.

The greenhouse resembles a pit greenhouse (walipini) in that the floor is dug down 4 feet below the surface and the roof is slanted to catch the southern sun.

To avoid using heaters for the cold Nebraska winter nights, Finch relies on the warm underground air fed into the greenhouse via plastic tubing under the yard and one fan.

Finch says anyone can build a market-producing greenhouse for about $25,000 or “less than the cost of a heating system on a traditional greenhouse”.

He states that “people say that young person can’t get into farming anymore because it’s too expensive; for the price of a three-year-old four-wheel drive big tractor like they have to have now, we could build nine of these for that price”.

“Organic is the only sensible way to go” and “the local is really a bigger selling point than Organic”.

So, let’s look at the utube video and build your geothermal greenhouse.