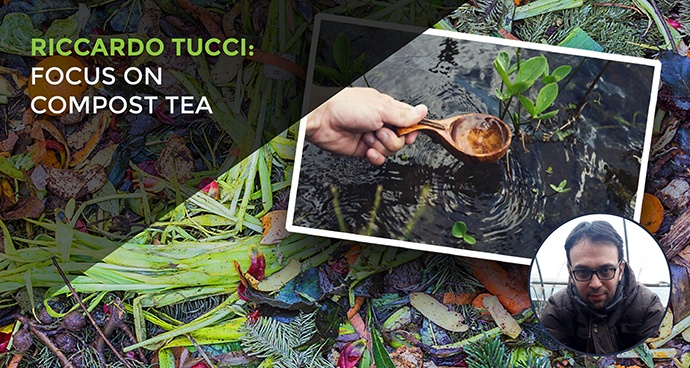 From large-scale ecological restoration to the design of a natural agricultural complex for productive-professional purposes, to the small organic vegetable garden for self-consumption; the use of compost is a fundamental point for the creation of fertility in soils.

Having a good composting site becomes essential in a permacultural project that is effectively sustainable.

The production of compost creates other by-products, such as compost tea, that can be one of the secrets in your permaculture center.

With this article, we introduce one of the best products we can make from a good compost: THE COMPOST TEA (CT).

In subsequent articles, we will address its characteristics from a nutritive and curative point of view.

The Fundamentals of Compost

Composting is a process of bio-oxidative modification through which organic biodegradable residues are transformed into a material called “compost”.

Compost is a product that is physically and biologically stable, highly humified, and is used in agriculture for the positive effects on both growth and crop protection.

Among the safe and innovative composting systems suitable for the production of quality compost, in addition to the industrial ones, are those based on onsite-farming technologies that have paved the way for the reuse of different types of agricultural waste.

Compost is used as a soil improver to improve the physical structure, biological fertility and natural salutogenesis of soils; as a source of natural nourishment for plants; as an alternative to peat in the mixing of growth substrates for the nursery and as a purification and bioremediation agent for the recovery and decontamination of marginal soils.

The Benefits of Compost Tea

CTs are able to produce beneficial effects when applied to plants, showing interesting suppressive abilities against the pathogens of different agricultural species and influencing the physiology of the plant, stimulating it and making nutritional extract more efficient, with consequent positive repercussions on the quantitative and qualitative aspects of production.

The presence of humic substances and nutritional elements is not negligible in the chemical component of CT.

Furthermore, these formulations have a large quantity and diversity of microorganisms such as bacteria, fungi, protozoa and nematodes, potentially useful for their suppressive and / or plant growth promoting properties.

The CT is an organic formulation extracted from high-quality compost, by fermentation or oxygenation in the liquid phase, conducted over a period of time that can vary from a few hours up to two weeks.

The fermentation takes place without aeration for the production of non-ventilated CT, while the ventilated CTs are produced by oxygenation.

The CT consists of an aqueous suspension of useful microorganisms and water-soluble organic and inorganic molecules extracted from the compost, which can have a positive effect both on the growth and development of plants, and in the defense against disease.

It is produced inside a fermenter.

Therefore, it is possible to run into so-called “on farm” fermenters, or in progressively more sophisticated plants which, although advanced in technology, must ensure, in the case of production of CT aerated, complete oxygenation and uniform mass and an efficient extraction of the compost, the latter placed in a permeable bag placed inside the fermenter.

The oxygenation of the liquid mass can be achieved by continuous recirculation of the extracted liquid or by direct aeration by active insufflation.

A few proposed innovations in recent years regarding the production of particularly efficient CTs involve the use of additives in partial or total water substitution in the liquid phase formulation.

These innovations propose, in fact, the use of extractors other than water, such as different wastes from the agri-food industry, such as whey, buttermilk, Boreland, and molasses.

These materials have been proposed both as extraction and as additives.

In the last case, the list of additives is further enriched with other materials, such as caseins and fish flours that allow an improvement in the quality of the biotic and abiotic component that is decisive for the effectiveness of the final product.

The CT contains when dissolved in aqueous solution, a large quantity of substances of an organic and inorganic nature, which represent real and immediate nutrients for the plants.

In the CT there are nitrogen, phosphorus and potassium and an abundant quantity of humic and fulvic acids. In general, the salinity of the CT does not reach toxicity values ​​for the plants.

If the compost of origin is not of quality, in particular, because of the heavy metal content, elements as lead, cadmium, copper, and iron can be released into the CT in an extremely bioavailable form during extraction.

Therefore, repeated treatments could increase the concentration of heavy metals in the sprayed soil and determine, in the long run, a negative impact on the environment and on human health.

On the other hand, if the compost is of quality, the concentration of heavy metals in the CT is very low and the impact on the ground and the environment is very minimal, especially when compared to the direct application of compost.

A very important abiotic component of CT is represented by the humic fraction. Humic substances originate from the chemical and biological degradation of organic residues.

Also, the microbiological composition of the CT is able to influence the propensity to particular destinations of use.

In the CT it is contained in suspension high microbial diversity including bacteria, actinomycetes, yeasts and fungi, both saprophytes and mycorrhizal.

In this respect, diversity, rather than the abundance of microbial populations, is considered as the main factor contributing to the microbiological quality of a CT.

These microorganisms are able to confer specific properties to tea, such as that of biological control of the main cryptogamic and/or diseases, biostimulation of vegetative growth and plant productivity.

The microbial component of the CT is affected by the different variables of the fermentation/oxidation process.

Furthermore, particular emphasis is given to the use of additives under fermentation/oxidation aimed at increasing microbial biomass.

This last aspect, however, is still very debated. If, on the one hand, additives can effectively affect the microbial community of tea by increasing, for example, biodiversity, on the other, they risk stimulating the development of bacteria dangerous to human health such as for example, Escherichia coli.

Compost tea is one of the topics we teach during our Permaculture Design Course.

Bahman Fazeli-, Hatam Shaban; February 2015. An Overview of the Benefits of Compost tea on Plant and Soil Structure.https://www.researchgate.net/[Last accessed: January 12, 2019]

Riccardo is an Agronomist and a permaculture farmer specializing in soil restoration, compost, natural fertilizers, natural pesticide, garden and farm design. He is a Professional Permaculture consultant based in northern Italy and does work around the world alongside World Permaculture Association. He supports the WPA movement with a future vision in the most important motto of the WPA :"we believe in abundance!". He is also the founder of the Temperate Permaculture Laboratory Educational Center; an experimental farm-laboratory where he tests all the best practices using Permacultural and Regenerative Agricultural research.