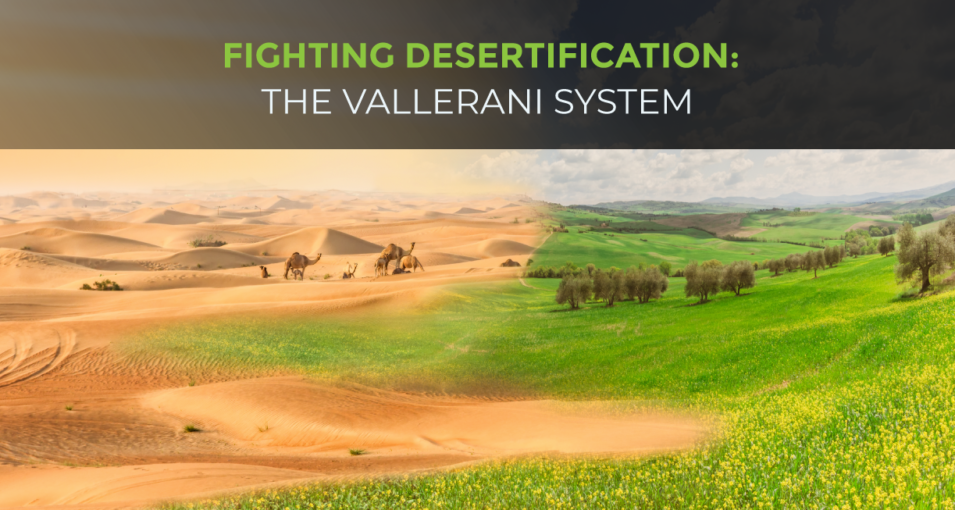 The Vallerani System (VS) is the fourth of the series of our in-depth look on the Harvesting of Rainwater Checklist.

The Vallerani System is a new approach to a technical and socio-economic integrated management of human and natural resources.

It consists of a method of working arid and semi-arid land to bring life back and restore the degraded soil.

Desertification is a type of land degradation in which a relatively dry area of land becomes increasingly arid, typically losing its bodies of water as well as vegetation and wildlife.

The Vallerani System plan to fight desertification by using the Delfino’s Plow.

The plow works by creating a pattern system of micro-basins and underground storage compartments, which will harvest and store the rainwater.

By doing this, allows the compacted soil to be broken up and then allowing the harvested rainwater to be absorbed and go deeper into the soil.

The increased amount of harvested rainwater between the plow lines improves the fertility of soil and crop production.

The Great Green Wall of the Sahara and the Sahel Initiative is a mission in Africa to attack climate change and desertification with a great mosaic green flowing landscape.

Eight years after the creation of the Delfino’s Plow in 1996, “The Desert Reclamation and Rehabilitation of the Sahelian Environment” using the Vallerani Water Harvesting System was born.

Reforestation On The Rise

We depend on forest recovery to help with soil erosion, preserve wildlife habitat, air quality,  increase the carbon sequestration, establish a seed source for recovery, as well as provide social and economic advantages.

Planting trees in the desert are an important mission because they produce clean water for the environment through evapotranspiration.

Trees collect water from the atmosphere through condensation, plus reduce the effect of wind, through their shade will reduce evaporation of the soil – through organic matter they live and in symbiosis with microorganisms increase organic matter in the soil that will retain more water.

A micro-catchment is a specially contoured area with slopes and berms designed to increase catchment of rain runoff.

When the Delfino’s plow is used to make these micro-catchment systems, they are ideally suited for large-scale reclamation work.

One great advantage of the Vallerani System is that this rainwater harvesting system offers flexible variations of settings.

These variations allowed the testing of different sizes of micro-catchment system patterns.

In each system, they measured run-off, soil loss, soil moisture, shrub growth and compared to a system with no rainwater harvesting methods applied.

He wanted to increase the productivity and the use of all the abandoned barren desert land.

He needed a water harvesting system the not only helps the land but the people within these depleted environments.

The Vallerani System has the people working together planting, picking seeds, harvesting, and being sustainable.

The use of technology and machinery for a water harvesting method doesn’t replace hard work within a community but, encourages change!

Another Method Of Rainwater Harvesting

Dr. Venanzio Vallerani believed that desertification could not occur by hands alone.

This Rainwater harvesting checklist, we are going in depth into the different ways we can accomplish desertification.

Each site has its restrictions and abundances that have to be examined to find the best method.

An update of the available Earth Repair Apparatus for Recovering Degraded Landscape Globally is available here.

However, with whichever method you decide to go with, we are coming out a little greener.