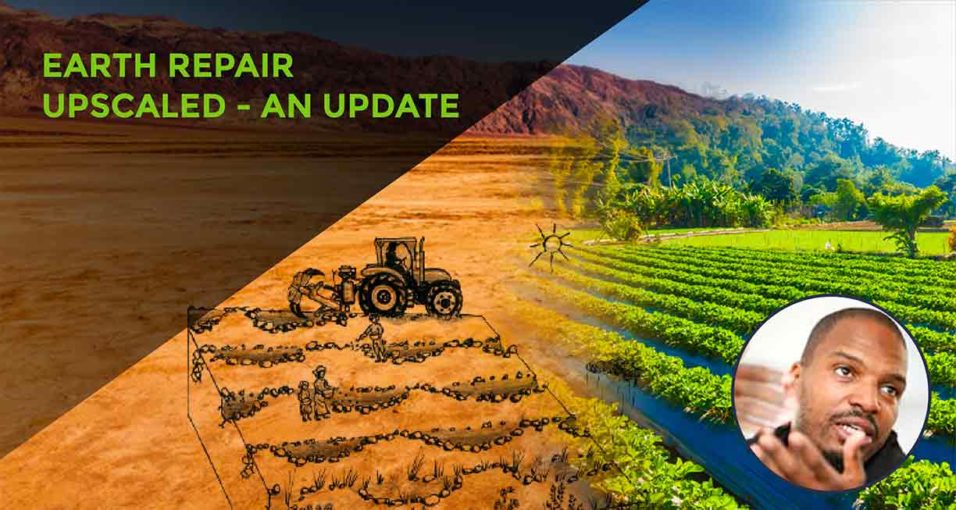 According to the Intergovernmental Science-Policy Platform on Biodiversity and Ecosystem Services (IPBES) assessment report on Land Degradation and Restoration published in 2018:

Land degradation is a pervasive, systemic phenomenon: it occurs in all parts of the terrestrial world and can take many forms.

Combating land degradation and restoring degraded land is an urgent priority to protect the biodiversity and ecosystem services vital to all life on Earth and to ensure human well-being.

Unless urgent and concerted action is taken, land degradation will worsen in the face of population growth, unprecedented consumption, an increasingly globalized economy and climate change.

The implementation of known, proven actions to combat land degradation and thereby transform the lives of millions of people across the planet will become more difficult and costly over time.

An urgent step change in effort is needed to prevent irreversible land degradation and accelerate the implementation of restoration measures.

“Around 12 million hectares of land are lost each year to degradation.

In addition to harming the wellbeing of at least 3.2 billion people, land degradation costs more than 10% of annual global GDP in lost ecosystem services like preventing harmful nutrient run-off into streams or decreasing the effects of floods.

Halting and reversing current trends of land degradation could generate up to 1.4 trillion USD per year of economic benefits and go a long way in helping to achieve the Sustainable Development Goals.”

Earth repair related definitions given by IPBES used in their assessment:

Is defined as the many human-caused processes that drive the decline or loss in biodiversity, ecosystem functions or ecosystem services in any terrestrial and associated aquatic ecosystems.

Is defined as the state of land which results from the persistent decline or loss in biodiversity and ecosystem functions and services that cannot fully recover unaided within decadal time scales.

“Degraded land” takes many forms: in some cases, all biodiversity, ecosystem functions, and services are adversely affected; in others, only some aspects are negatively affected while others have been increased.

Transforming natural ecosystems into human-oriented production ecosystems — for instance, agriculture or managed forests — often creates benefits to society but simultaneously can result in losses of biodiversity and some ecosystem services.

Valuing and balancing these trade-offs is a challenge for society as a whole.

Is defined as any intentional activity that initiates or accelerates the recovery of an ecosystem from a degraded state.

Is used to refer to restoration activities that may fall short of fully restoring the biotic community to its pre-degradation state.

If the current pace [of land degradation] continues unabated, a gargantuan amount of $43,000,000,000,000 ($43 trillion) will be lost to the world economy by the year 2050, warns the United Nations Convention to Combat Desertification (UNCCD).

But the anticipated colossal loss can be avoided by spending $4.6 trillion on addressing a combination of human-induced processes adversely affecting the biophysical environment and huge stretches of fertile lands.

Another report published by United Nations University provides more information and context highlighting the urgent importance of addressing land degradation, desertification, and the impacts associated with losing critical ecosystem services as a consequence:

Their report estimates the value of ecosystem services worldwide forfeited due to land degradation at a staggering US $6.3 trillion to $10.6 trillion annually, or the equivalent of 10-17% of global GDP.

Furthermore, the problem threatens to force the migration of millions of people from affected areas.

An estimated 50 million people may be forced to seek new homes and livelihoods within 10 years.

That many migrants assembled would constitute the world’s 28th largest country by population.

Effectively addressing land degradation could help avert that humanitarian crisis and add US $75.6 trillion to annual world income, according to the report, “The Value of Land,” produced by The Economics of Land Degradation Initiative.

Some 52% of world agricultural land is moderately or severely degraded, the report says.

Quick facts from the report:

“Mechanized labour” in the form of earthmoving equipment, tractors, and the myriad attachments currently available for use provide us with an amazing opportunity to perform a great deal of beneficial Earth repair work.

They help in rapidly establishing efforts to reverse land degradation and desertification on a grand scale.

Many of us who spend lots of time thinking about this topic are always trying to identify methods, techniques, and strategies to advance the Earth repair / ecosystem restoration / regenerative design agenda as broadly and effectively as possible.

A couple of useful ideas…

There were a couple of ideas I wanted to quickly mention here which have piqued my interest and may prove to be useful to others working in a similar vein.

To begin with, the relatively widespread accessibility and use of “mechanized labour” at this point in human history afford us a unique “technological opportunity” to do an enormous amount of Earth repair work on damaged landscape assuming the use of these technologies is motivated by a well-informed, rightly guided intention.

Therein we find the problem inherent in the development and use of technology, the intent, not necessarily the tool in and of itself.

The ultimate aim is to use the mechanical tool to aid the re-establishment of biological infrastructure and optimal ecological functioning via the biogeochemical cycles responsible for making life on Earth viable.

Initially, the central focus of the work needing to be done is the restoration of proper hydrological functioning in degraded landscapes.

The Spanish climate scientist Millán M. Millán Ph.D. was once quoted as saying: “Water begets water and vegetation is the midwife”.

If landscapes are degraded to the point that they are no longer capable of supporting vegetation, this becomes the genesis for a concatenation of events that affect atmospheric dynamics and, subsequently, climate.

Given the speed and scale at which this problem is becoming more pervasive, some form of intelligently employed machine use would be helpful in making a real difference, especially with regard to soil compaction and the reduced ability to infiltrate water back into landscapes.

In particular, I’ve been focusing on developing an “ideal” work platform based on a commonly used, widely available piece of agricultural equipment we often take for granted, the tractor.

Tractors embody an enormous amount of work capacity when one considers how.

The term manpower was used in the early days of the steam engine and the internal combustion engine to describe the power of small engines.

It corresponds fairly exactly to the amount of power a healthy man can exert over a period of a few hours.

Because tractors typically come equipped with PTOs (power take-offs), 3-point linkages, and hydraulics a variety of attachments and implements may be used making it a very potent and versatile base to operate from.

However, the use of heavy equipment is not without problems.

It’s not uncommon for significant damage to be done to landscapes due to the high pressures exerted by the tires through ground contact because of their relatively small contact pad area.

This often causes compaction and rutting, in addition to incurring a high risk of losing expensive equipment in very wet conditions: 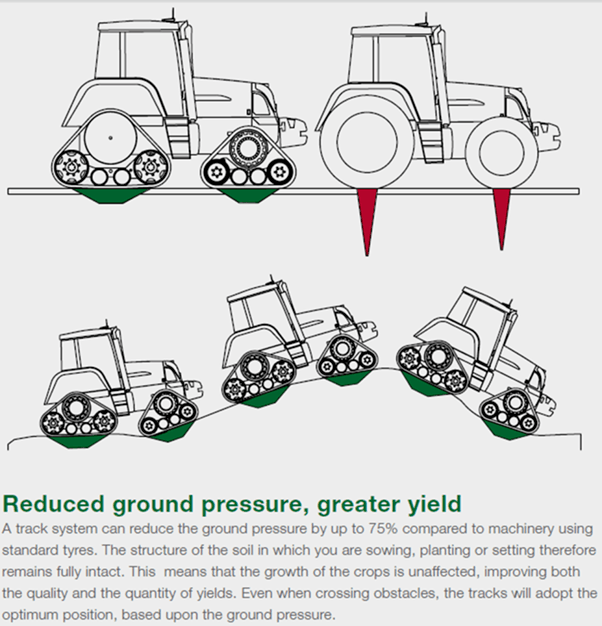 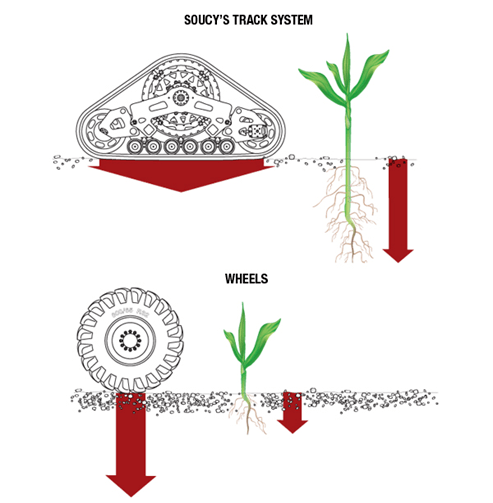 Thankfully, recent developments such as rubber track direct replacements for tires has eliminated these problems and opened the door for a variety of new possibilities & capabilities in its employment as an earth repair tool.

Especially in creating features which can help to rehydrate & re-aerate landscapes, which forms the foundation of ostensibly all of our Earth repair work. 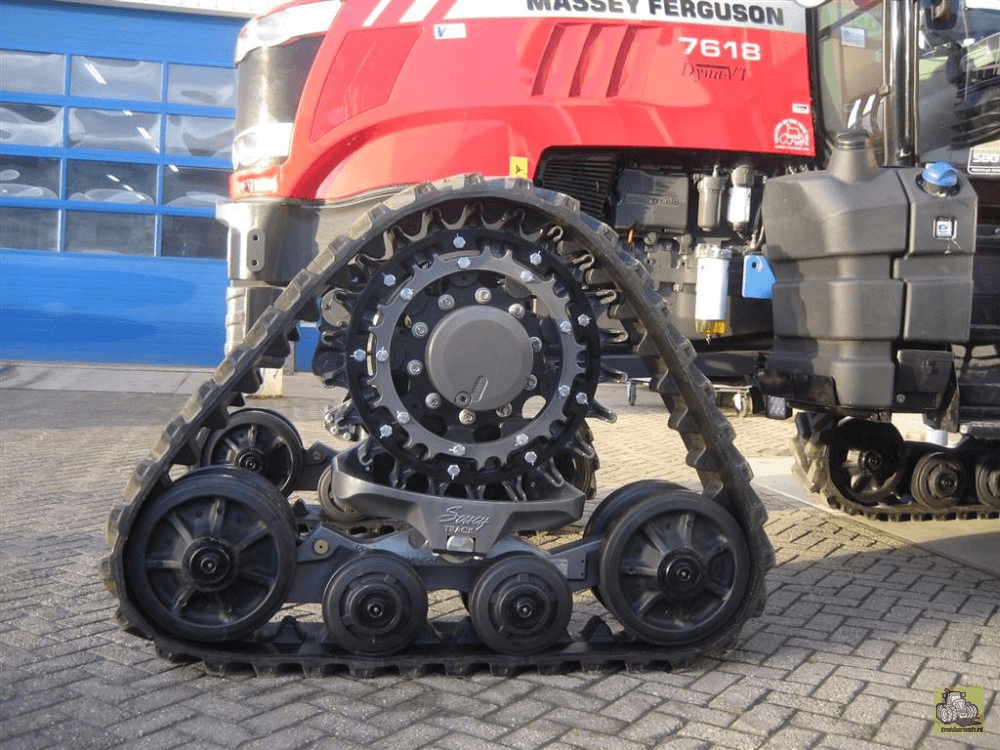 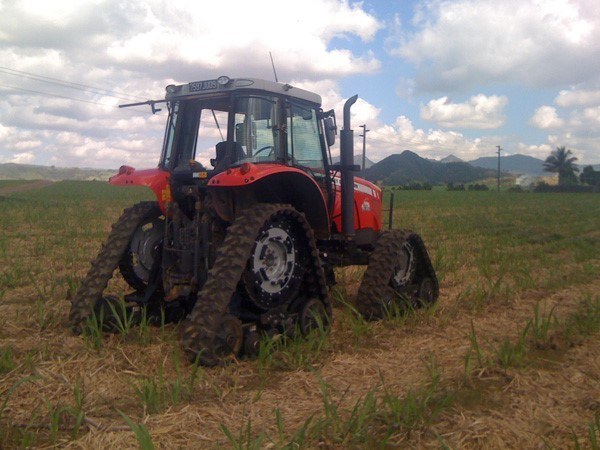 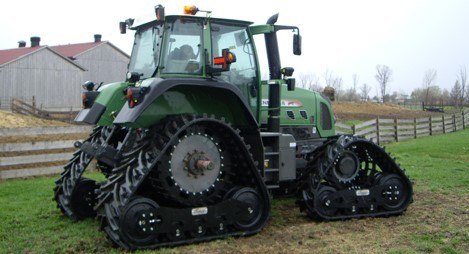 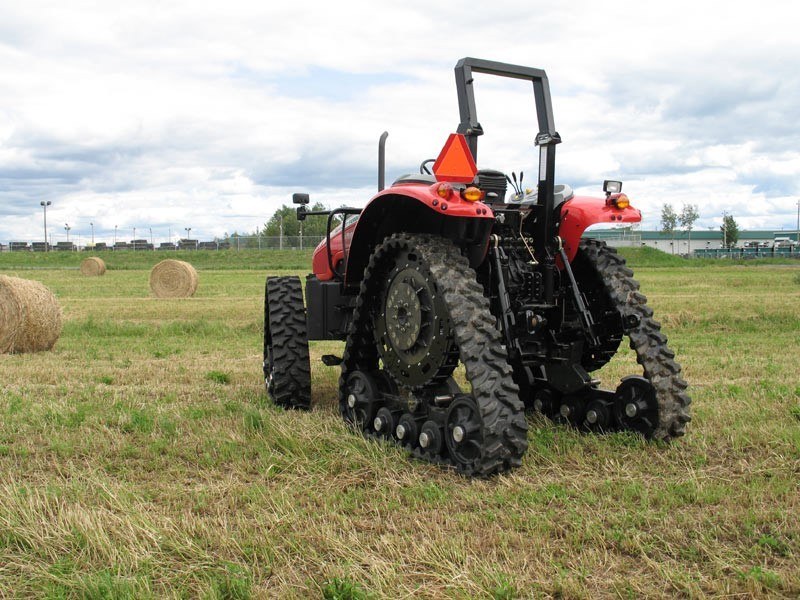 There are a few specific attachments that are of special interest in this regard:

They are all highly effective tools in their own right individually, but my aim has been to combine their use as part of an earth repair “kit” with the tractor serving as an idealized equipment platform (what I’ve temporarily named the TERA/TRAACK or Tracked Earth Repair Apparatus / Terrestrial Rehydrating Aeration Anti-Compaction Kit) which could be combined with other implements – a prime example would be compost processing and the production of mulch material (i.e. – chipper/shredders & windrow turners): 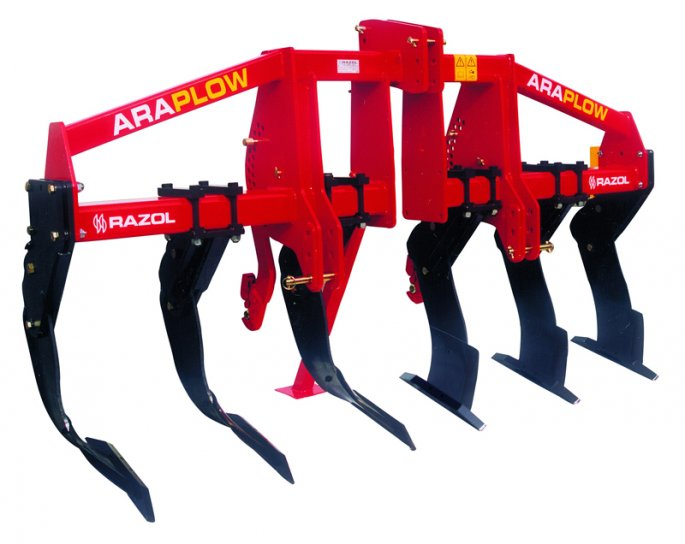 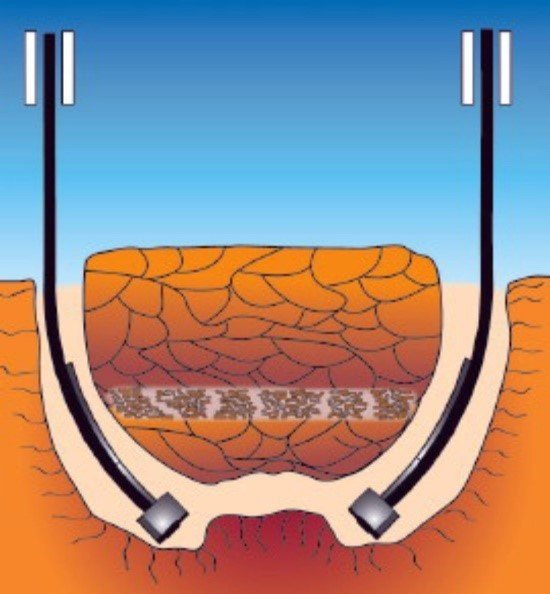 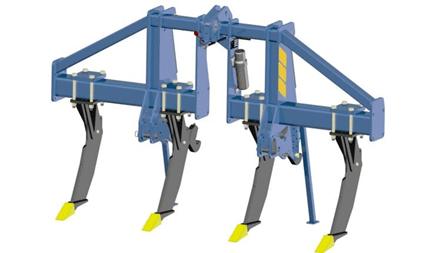 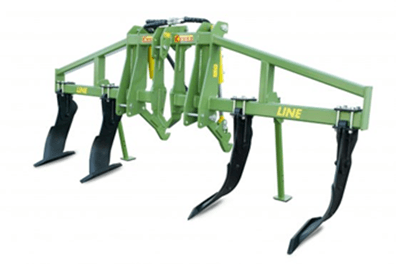 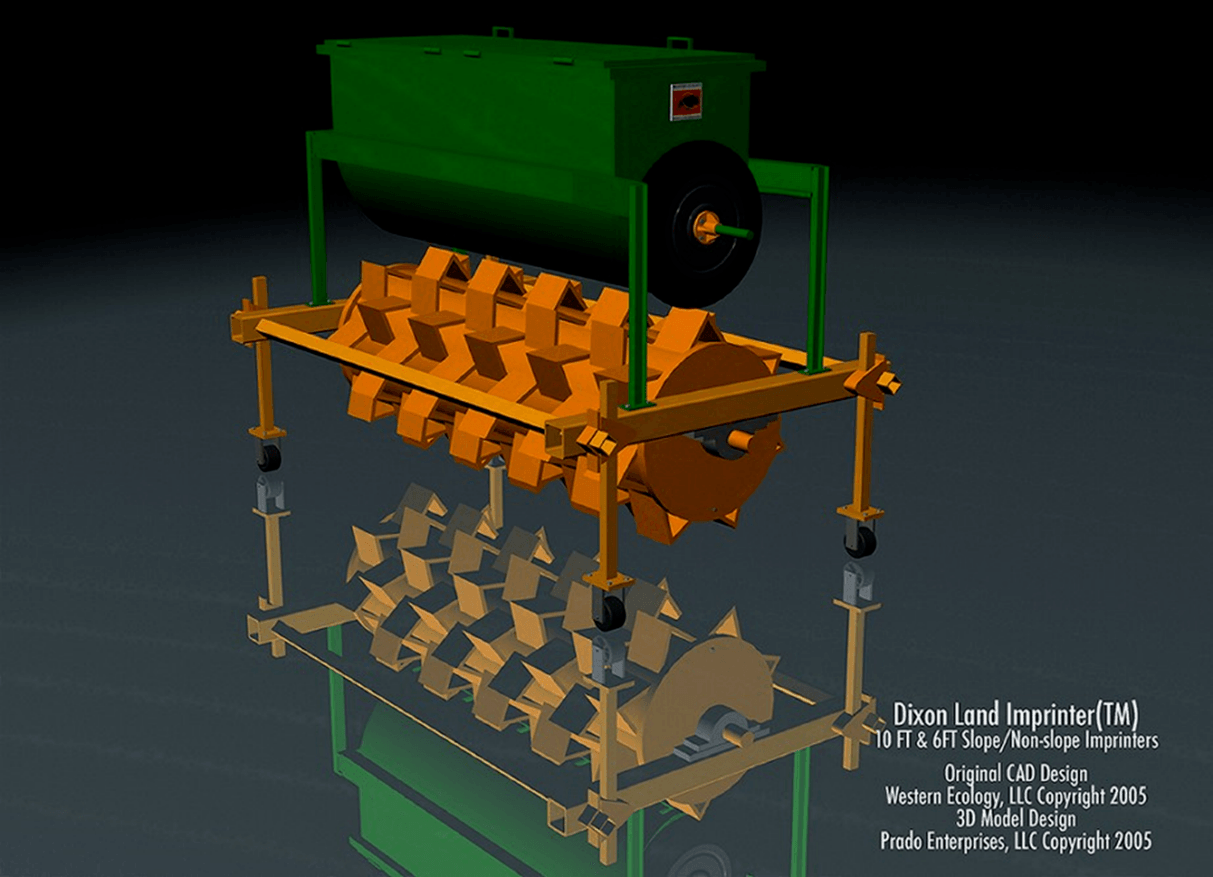 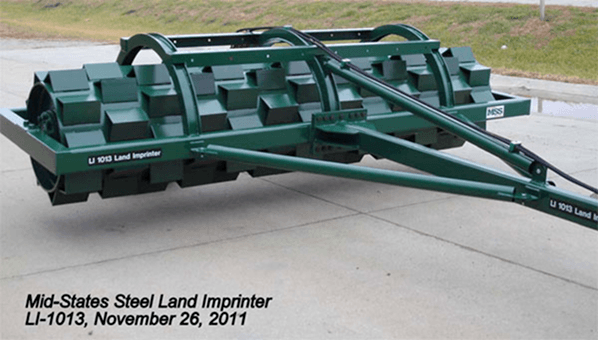 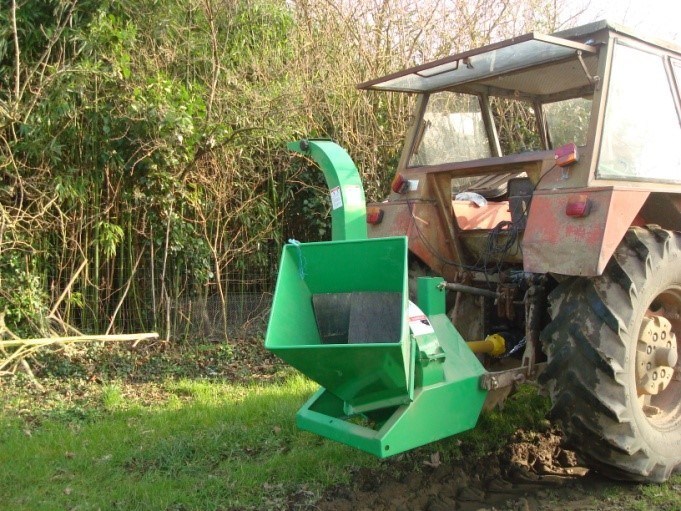 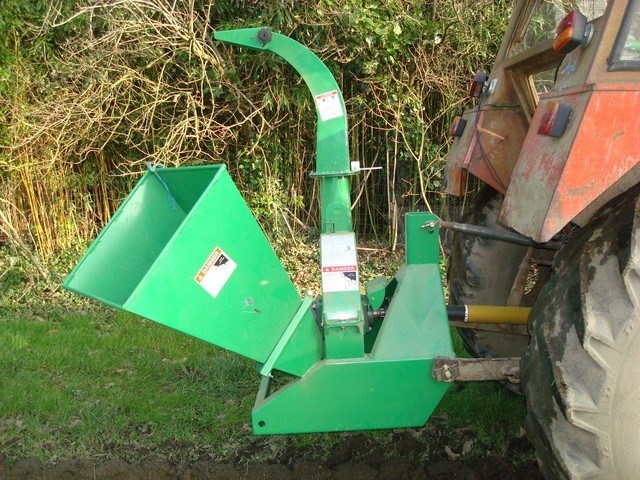 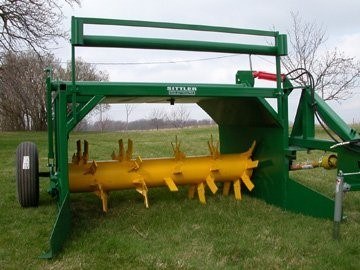 In the aggregate, a formidable instrument for augmenting efforts to rehydrate and re-aerate damaged landscapes (in addition to re-introducing organic matter and habitat for a diverse array of microscopic & macroscopic biology) is formulated.

…a couple of additional tools/attachments of interest:

The stage is now set for the “accelerated succession” of living systems to become re-established with the essential natural infrastructure in place significantly increasing the chances for success.

This article is an update of the original piece published at the PRI of Australia website.

Interesting article, other equipment of interst is manufuctured by P.A. Yeomans (good Website) who pioneered subsoil ploughs and Keyline for water conservation in Australia, The Howard Paraplow (no longer made) was also a very useful tool if used in the right conditions and can restore the permiability of compacted and degraded land. Older crawler tractors aoften had cleated steel tracks which broke up the surface almost like a spading nachine by their action as they moved.

…a couple of addition tools/attachments of interest: