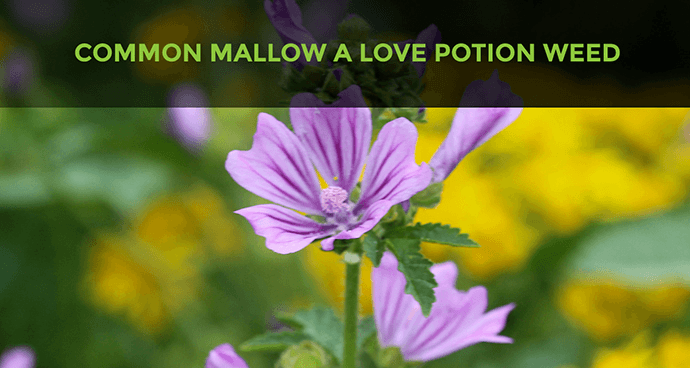 Buttonweed, cheese plant, cheeseweed, dwarf mallow, and round leaf mallow are other names for the Common Mallow.

I am continuing with this blog post series on the neglected plants that most refer to as weeds!

If you missed Dandelion, Starflower, Ribwort Plantain, Common Nettle, and Chicory, please check those blog posts out to further read on benefits of these common plants.

This is my last blog post on the series of my favorite plants, at least for now!

This plant has been famous in plenty of folklore throughout history.  One, in particular, inspired the title of this blog post.

Additionally, Mallow was eaten and ritualistically vomited by the Iroquois as a love medicine (Moerman, 2009) (1).

Whether you believe this folklore it is undeniable that common mallow had and still has a place in credible medical treatment.

Common Mallow has shown to be an effective antimicrobial and antifungal.

A mallow extract treats acne and has a patent and is currently on the market.

Ethanol extracts of Malva neglecta also have antibiotics properties to fight against Staphylococcus.

Every part of the common mallow is edible the leaves, the seeds, the stem, roots, flowers, and the fruit.

Add the leaves to a salad. You can also add the leaves as a thickener to soups, stews, gravies, and sauces similar to okra. If you dry the leaves, it could then make it into tea.

You can also try frying the leaves, for a crispy alternative.

Add the flower to a salad.

The seed pods can be substituted for most of the egg white if wanting to make mallow meringues.

Just boil up the peeled seed pods using three parts water 1 part seed pods, and reduce the liquid by half. For every half cup of liquid add one egg white, ¼ tsp of cream of tartar, some vanilla and castor sugar, then whip it up until foamy and stiff, just like meringues (2).

You can also eat the stems fresh in salads.

The roots are rich with inulin to make soup for a home remedy treatment.

It is essential to wash the stems and leaves thoroughly as they can accumulate dust and dirt.

Another edible part of the common mallow is the cheese shaped fruit.

The fruit is ring-shaped and splits into numerous small seeds.

This is why this plant is sometimes called cheese plant or cheeseweed.

Making it spread across large areas like many of the other under-appreciated plants.

“… the mallow is not to be despised; rough though it be and the companion of coarse weeds, its satin-like flowers of deep pink and dark-green reniform leaves set off many a bit of barren waste (1) (Bloom, 1903).”

I love ending this “weed” series with this quote because it’s a reminder to not hate these plants.

Please do not use chemical pesticides in your fight against these plants.

Leave a comment or contact me if you need help finding a better way to remove these plants if you must!

This is a great article. I’ve been weeding this plant from a friends garden the last few weeks, and the whole time I have had the feeling that it has medicinal properties. It’s very interesting I read a short “blurb” that it was used as a purgative or “vomitivo” (as we call in in Peru). I did not see any instructions on how to use it this way, used for love medicine. We use a lot of different plants in this way and Peru, and I’m trying to understand the reasons why for Malo, specifically in association with love. Normally we only use purgatives for bacteria or parasite problems. So interesting. Thank you!

Thank you for your comment and for bringing up the traditional use of Common Mallow as a purgative in Peru. At the World Permaculture Association, we focus on promoting the use of plants for sustainable living and food production, rather than traditional medicine. However, it’s fascinating to learn about the diverse uses of plants in different cultures. In regards to the use of Common Mallow as a love potion, it is a traditional use that has been passed down through generations, but we do not have any scientific evidence to support this use. It’s important to note that, as with any plant, it should be used with caution and proper knowledge of its potential effects.