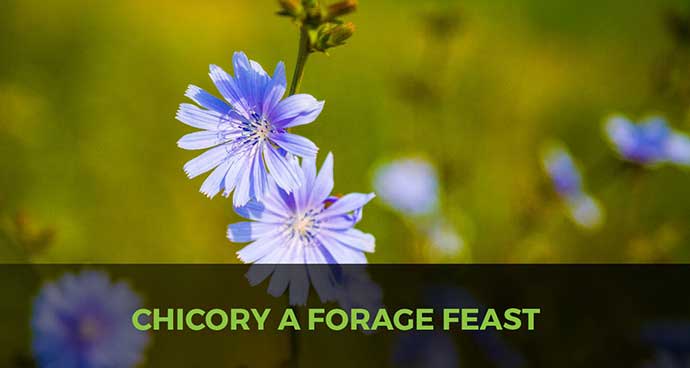 Common chicory is also known as the blue daisy, blue dandelion, blue sailors, blueweed and, coffee weed to name a few. Cichorium intybus is a somewhat woody, perennial herbaceous plant of the dandelion family Asteraceae, usually with bright blue flowers, rarely white or pink. I am continuing with blog posts dedicated to saving our essential “weed” plants from the money hungry chemical pesticides pushers. These “weed” flowers are much more than the pretty blue flowers in a child’s mixed blue and yellow dandelion bouquet!

Chicory In The Medicine Cabinet

The roots and dried above-ground parts of the chicory are used to make medicine. Chicory for high blood pressure, heart failure, loss of appetite, upset stomach, constipation, liver and gallbladder disorders, cancer, and rapid heartbeat. Some people apply a paste of chicory leaves directly to the skin for swelling and inflammation (1). For at least 5,000 years, people have cultivated chicory for its medicinal benefits (2). Additionally, this plant has also been observed to help treat: promoting milk flow in nursing mothers, treating inflamed eyes, poulticed for swellings, used as a diuretic and laxative, and treat fevers and jaundice.

Research has shown that it can increase the flow of bile, which could be helpful in treating gallstones. Laboratory research also has shown root extracts to be antibacterial, anti-inflammatory and slightly sedative. They also slow and weaken the pulse and lower blood sugar. Leaf extracts have similar, though weaker, effects (2).

A plant that is a nutrient and vitamin-rich food especially rich in Vitamin A, Potassium and folic acid. Chicory is a rich source of beta-carotene (1). Eating wild picked chicory has a bitter taste. Boiling and changing the water a couple of times will reduce the bitter taste. Wild chicory leaves can be a substitute in a lot of spinach recipes and are almost identical to Dandelion Greens.

Cultivated chicory also has a market; this “weed” is grown into three different varieties, mostly eaten raw in salads. There are many types I’m going to mention four categories which are Radicchio, Sugarloaf, Belgian endive and, Catalogna chicory. However, please let me also mention that even though chicory is sometimes called endive, it is a different species in the genus, distinct from Belgian endive.

In the 19th century, its use as a coffee additive and substitute became widespread in France and areas of French cultural influence like Louisiana. Chicory use grew with the advent of the Civil war. As trade disruptions and blockades disrupted deliveries of coffee, citizens and soldiers made do by roasting wild chicory root, as well as many other ingenious substitutes like corn and ground nuts (3). Chicory is a natural occurring caffeine-free alternative to coffee. Which gives coffee drinkers the full flavor of coffee with naturally lowering their caffeine intake.

Recommended serving is to use about two tablespoons (about 11 grams) of ground chicory root per 1 cup (235 milliliters) of water.

Chicory is still the preferred Coffee substitute in much of New Orleans!

I will be doing a full blog post on Organic Beer as we get closer to the holidays. I did want to mention that brewers currently and in the past sometimes have used roasted chicory to add flavor to their stouts and others brewed with coffee and roasted malts.

Thomas Jefferson and others grew chicory as a forage crop. Because it doesn’t dry thoroughly, it was usually cut and fed green to horses, cattle, sheep, poultry, and rabbits (2).

Additionally, it has many benefits to the animal that forages on the crop such as being highly digestible, low fiber concentration, protein, fat content, and low quantity of reduced tannins.  Tannins increase protein utilization efficiency and, Some tannins reduce intestinal parasites.

Studies have indicated that farm animals that eat chicory have fewer worms burdens.

Chicory has a couple of great coupling companion planting partners with carrot and fennel!

I also wanted to add here about chicory being a Dynamic Accumulator.  This term is quite popular in Permaculture and Organic farming, however,  there is no scientific data supporting it. If you’re aware of scientific research or you have proven data of the effect of dynamic accumulators, please reach out to me in the comment section! I would love to learn more from others in the field on this!

As I go through this series of the unappreciated plants mostly known as weeds, we have the potential to feed so many more people that right now are going hungry. Permaculture is the solution to end World Hunger! With Permaculture everything is a potential resource and is used as it should be. Unwanted plants could be a nutritious food source. Within the steps and principles of Permaculture, we can address the ever-growing world population!

Consequently, let me continue to say that it’s never Okay to use chemicals to treat unwanted plants even in your own garden. Believe me when I say the benefits do not out weight the negative impact your placing on the land, water, soil, and the earth.

Let’s all Feast and Love a “Weed”!