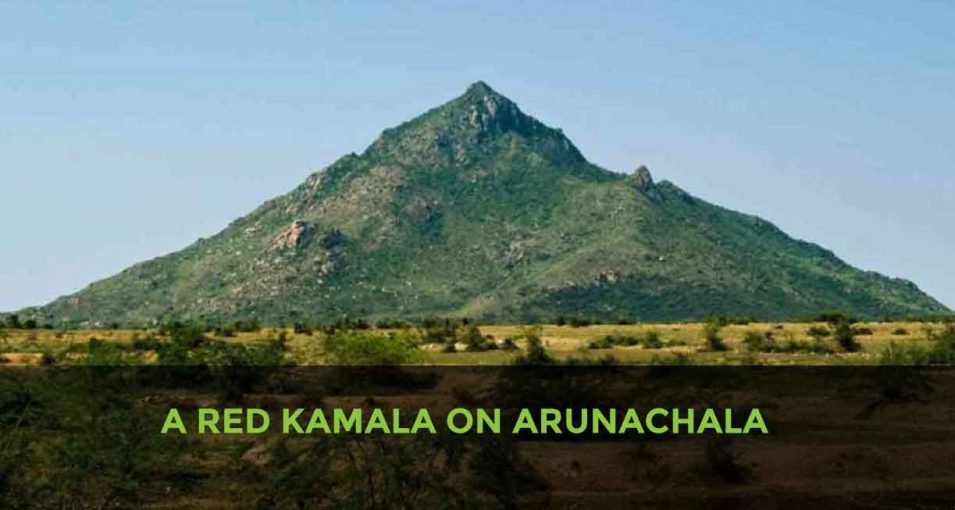 When I first arrived at Arunachala back in 1989, the mountain was little more than a pile of rock, with very few spindly trees breaking up the rockscape.

Little wonder, since the mountain was deliberately burnt ever year, partly as a homage to Lord Siva (the mountain represents Siva, in form of Fire!), and partly to ensure that the dominant grasscover that managed to survive, would be burnt to an even stubble.

It was harvested as thatching material for the homes of those wealthy enough to afford the high quality thatch it provided; burning the stubble also furnished a little nutrient as potash on the otherwise barren slopes.

The government had attempted reforestation years before, but had given up long ago, discouraged by the miserable success rate.

I had come to help coordinate a project that aimed to reverse that failure.

Against great odds, if the widely-held local opinion was to be believed.

They thought the idea was crazy.

I think a little madness can go quite a long way in adverse circumstances.

The project had started for me when a letter was written to a rainforest action group I was loosely associated with.

Its author was an Australian woman who had lived at the foot of the holy mountain for many years.

Apeetha despaired at its degraded state, but she had decided to try to do something to change that situation, rather than accept it.

“This mountain has no rainforest” she wrote.

“And it never did, and never will. But I believe that if there are no trees on a mountain like this, then the chances of saving the rainforests you seek to protect, are very limited.”

Her approach was intriguing enough that we decided to have a look at it.

After one of our group had checked it out and confirmed that there was a small band of people trying to make a difference, I travelled to the mountain with the intention of doing my best to help them.

The task was surely daunting.

What fires didn’t kill, a sharpened bush knife would, and any plant daring to grow had little chance of maturing before one or other of those two threats intervened.

And that’s without mentioning the goats.

“If you have no problems, buy a goat.”

“If you have no problems, buy a goat.”

There was no shortage of problems roaming the slopes in search of anything remotely resembling nutriment.

In short, I quickly understood at least three of the challenges that could dampen our enthusiasm, thwart our hopes for success.

With a dear friend and co-activist, I climbed the mountain.

Higher up the mountain, there was actually marginally more vegetation struggling to survive.

I was shocked to recognise what seemed to be a familiar small seedling.

I’m no botanist, but having planted thousands of diverse seedlings in regenerating my own ravaged land back in Australia, I had certainly learned to recognize a lot of plants there.

This was one of them: Red Kamala (Mallotus philippensis).

What shocked and excited me though, was that this tree only grew in rainforests, or on the margins of them!

Red Kamala on my land in Australia – sub-tropical rainforest

Certainly Apeetha was right in saying that Arunachala was no rainforest mountain, but now it seemed that she may well have been wrong to say that it never was.

And if that was the case, then there was no reason why she may not also have been mistaken to say that it never will be.

Looking closer at the ground around the small shoot, it became clear that it was actually a root sucker emerging from the root attached to a gnarled stump a metre or so away. I dared to dream of this rocky peak draped in lianas and towering forest giants. Surely not just a fantasy.

If there’s a moral to this tale, perhaps it would be that devastated lands have an unseen past, but also an unknowable future.

And in my experience, when we learn to respond harmoniously to the patterns of Nature, the responses are invariably more spectacularly abundant than most people can imagine.

I count myself amongst them; even though I’ve been regenerating land for more than 40 years, still I’m astounded by the forces released when we merge with the other elements of Nature.

We’re definitely a part of it, and never apart from it.

One thing is certain to me: if we humans perceive ourselves as part of Nature rather than separate from it, the difference is vast.

Both with the humility of our smallness, and also the greatness of our capacity to initiate extraordinary things (including regeneration).

When we take that responsibility to heart, we can surely create remarkable regeneration of this planet, first in small parcels, and then in huge wastelands.

Beyond that, there are no limits.

Wow! And you even quote a Sufi! My first permaculture experience was @ a Sufi community @De Voorde, Holland in a very old monastery converted into a modern spiritual community. My lush garden is full or medicinal herbal, pollinator-friendly and multi-use permaculture plants, using permaculture and biodynamic methods!