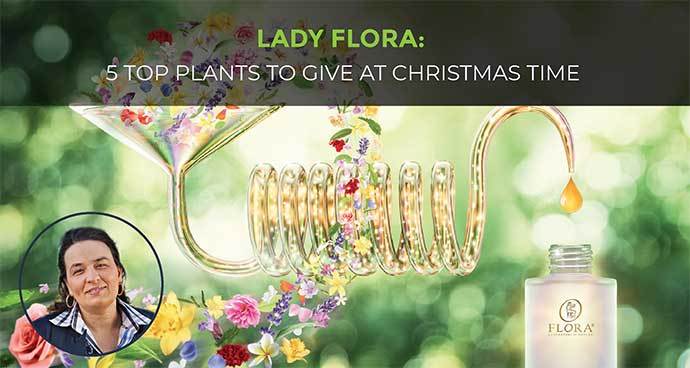 Gifting a plant at Christmas is an eco-friendly, healthy and hopeful option, a hymn to life. A suitable gift both to celebrate a friendship, to consolidate a relationship between colleagues, give to a relative and finally a romantic way to say “I love you.”

At FLORA we would like to recommend five plants which, due to their shape, color and tradition are revealed to be perfect Christmas gifts or decorations for your home.

The Christmas star considered one of the major signs of good omens for the Christmas holidays, and it is a plant easy to find and often sold to support charitable and charitable activities. Native to Mexico, where it is called “Flower of the Holy Night.” The legends that revolve around this plant with red flowers tell of a poor and very sad girl because she had no gift to give during Christmas Eve. For this reason, not to present himself empty-handed, he decided to collect the common grass on the street that magically transformed into the beautiful Christmas Star.

The Christmas Rose known with the botanical name of Elleboro, it is recognizable thanks to its beautiful white flowers that bloom during this period. The variety during Christmas holidays is Helleborus niger, whose legend tells that while the Three Wise Men offered gifts for the birth of Jesus, a young shepherdess without gifts to offer began to cry. An angel, noticing her, showed her little white flowers that were blossoming under the snow and that she could collect and offer as a gift.

A small local plant with pungent leaves and red berries, during Christmas holidays it is used as a cut flower to decorate the house or the gift packs, as a synonym of good omen. In ancient times it was believed that Holly could ward off evil spirits, thanks to its characteristic of perennial and evergreen plant. It is possible to give it away in a large vase with good drainage and with a land rich in humus.

Kissing your love under the mistletoe plant is one of the most romantic Christmas traditions. This custom has Scandinavian origins: in the mythology, the mistletoe is the sacred plant of Frigg. The goddess of love.  After her son Balder was killed by an arrow of mistletoe, she began to cry on his body and while his tears were transformed into pearls white of the mistletoe. The son came back to life. The happiness was such that the goddess kissed anyone who passed under the tree on which grows the mistletoe so that nothing bad could happen to all those who had given a kiss under a twig of mistletoe.

An evergreen perennial plant is deep red if of the Vagans species. Usually, it is given in a vase to decorate and color balconies and tables. In ancient times it was considered a magical plant. In building brooms for cleaning the temples, Red Heather was the main source. Additionally, Red Heather was known as a purifying plant and able to keep away evil spirits.

Flora is a verified donor of the World Permaculture Association and produces all of their essential oils according to permaculture ethics and principles. We are proud to share the products of Flora with you and to have Flora as a verified donor to our shared mission and purpose.

Sonia de Angelis, also known as Lady Flora, is a dynamic, curious, determined and, explosive woman. She is a loving and present mother, and a sincere and heartfelt friend. Sonia is a person who is passionate about essential oils and Aromatherapy. She follows and promotes a lifestyle filled with the power of nature. Since finding and experiencing the natural benefits of Essential Oils and Aromatherapy she wants to spread the benefits as well as tips and recipes worldwide for all to experience. “I am part of the lucky circle of friends who have benefited from her advice” Valentina Longo http://www.flora.bio/en